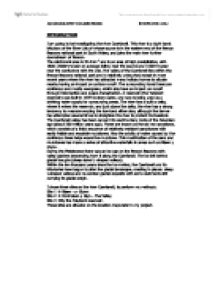 INTRODUCTION I am going to be investigating the river Caerfanell. This river is a right-bank tributary of the River Usk of whose source is in the eastern end of the Brecon Beacons national park in South Wales, and joins the main river further downstream of Brecon. The catchment area is 32.4 km^2 and is an area of high precipitation, with 1800- 2000mm/year on average falling near the source and 1100mm/year near the confluence with the Usk. The valley of the Caerfanell lies within the Brecon Beacons national park and is relatively untouched except in more recent years where the river has attracted many holiday homes to situate nearby having an impact on surface runoff. The surrounding forest trees are coniferous and mostly evergreen, which also have an impact on runoff through interception and evapo-transpiration. A reservoir (the Talybont reservoir) was built in 1937 to store water, and now is being used as a drinking water supply for surrounding areas. The river has a built a delta, where it enters the reservoir, and just above the delta, the river has a strong tendency to meander eroding the farmland either side, although the farmer has attempted several times to straighten the river to protect his livestock. The Caerfanell valley has been carved into sedimentary rocks of the Devonian age (about 360 million years ago). These are known as the old red sandstone, which consists of a thick sequence of relatively resistant sandstones with easily friable and erodable mudstones. Also the acidity of water caused by the coniferous trees helps erode the mudstone. This modification of the sand and mudstones has made a series of attractive waterfalls in areas such as Blaen y Glynn. During the Pleistocene there was an ice cap on the Brecon Beacons with valley glaciers descending from it along the Caerfanell. The ice left behind glacial troughs (steep sided U-shaped valleys). Within the ten thousand years since the ice melted, the Caerfanell and its tributaries have begun to alter the glacial landscape, creating in places steep v-shaped valleys and re-worked glacial deposits with some sediments still carrying its glacial origin. ...read more.

This limit in friction increases velocity as velocity can occur more easily and more efficiently. The anomalies on this graph is situated at... Site 1 - The velocity reading is higher than expected at 0.527 m/sec, with a C.S.A reading of 0.2m^2 Suggested reasons for this anomaly (although naturally upstream the water has more energy due to the velocity), is the gradient of the land where the reading was taken may have been steeper than usual giving the water an increase in kinetic energy therefore increasing the velocity reading unexpectedly. Site 3 - The velocity reading is lower than expected at 1.85 m/sec with a C.S.A reading of 0.418m^2. Due to the farmers attempt to straighten the river at site 3 the river eroded back to return to its original state of a meander by lateral erosion, pushing the riverbanks back causing the stonewall to collapse into the river and stay there. The river is too small and weak to transport these boulders so the river has been shaping them ever since. Meanwhile the processes attrition & corrasion are shaping the boulders until they are small enough to be transported, the big boulders have disturbed the flow of water by refracting and deflecting the water off the stones, creating more friction (which slows down the water) which then consequently disturbs the velocity reading. The overall velocity reading may have been hugely effected by the data taken in the inside of the meander where energy levels in the river are at there lowest and processes such as deposition occur (not erosion or transportation) therefore reflecting this on the graph. [image004.gif] [image006.gif] [image008.gif] These patterns above occur because the riverbed becomes smoother as you go downstream therefore creating less friction along the wetted perimeter, which in return increases the rivers energy and likewise its velocity. Consequently the riverbed becomes smoother because of... � River erosion processes such as attrition due to the sediment carried in the river, � Corrasion because of the acidic water due to ...read more.

But without the energy from water velocity the channel shape of the river wouldn't be able to hold the capacity of water as it increases downstream. Also as answered in question 4, there is a negative correlation with velocity and gradient, but theses two factors do not necessarily depend on each other, as I would have expected velocity to decrease as gradient did. We now know that other factors i.e. a decrease in friction have a greater affect on velocity so the fact that there is a gentler slope does not mean that this factor was the reason for the increase in velocity. There is no correlation between both variables that represent channel shape (C.S.A and roughness) and gradient. This is because none of these factors rely or affect the others shape or results. If you look at all the factors in this question as a whole as shown on graph you can see that there are correlations of a positive view between C.S.A and velocity, negative correlations between roughness and gradient against velocity and no correlation between channel shape and gradient. EVALUATION This project's data is far from perfect as I am not a professional geologist who knows how to use the equipment to a perfectly accurate standard. Most of the limitations of this project are mentioned in the methodology apart from the general strengths and weaknesses which is stated in the table below: STRENGTHS WEAKNESSES The three sites you choose were not bias in any way as we conducted the experiments across the whole river. We had to rely heavily on other people's results and accuracy for this experiment as we split the river into 3 parts at each sites so other groups gathered results for us. I was in the smallest group so we would have gathered the least data of the river, whilst other bigger groups carried out the work on bigger sections on each site gathering a better holistic view of the river. Not one of our results was made significant by spearman's rank, which made supporting my hypotheses very difficult. ...read more.