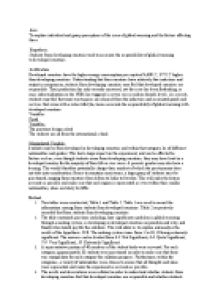 Furthermore, to widen the survey, students from other schools can also be questioned. Furthermore, the questionnaire separated them based on their nationality as to whether they were from a developed or developing country. However, many of these third-culture kids have lived in other countries and may therefore have adopted their mentality which could have affected the results. Although this problem was attempted to be avoided through asking a broader range, the 40 students was still not sufficient. To improve this aspect a more detailed questionnaire could be developed, which specifies for example, the country they have lived in longest or most recently. Also, random members of the student body were picked, however it is hard to judge how much they actually knew about global warming and its causes. Therefore, many of the students said pollution as to why developed or developing countries are responsible, but failed to specify the source of the pollution and therefore whether it was in fact a greenhouse gas. This may also have affected how significant they thought global warming was, as they may not have been aware of the debate and different philosophies present. In future a short test could be developed that questions the candidates? knowledge of global warming. This could ensure that the results given by the candidate is reliable and accurate. ...read more.