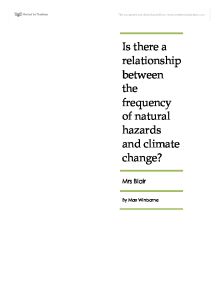 Is there a relationship between the frequency of natural hazards and climate change?

Is there a relationship between the frequency of natural hazards and climate change? Mrs Blair By Max Winborne Is the frequency of hurricanes and related storm types increasing? Globally, there is an average of about 90 tropical storms every year. According to the 2007 Fourth Assessment Report of the Intergovernmental Panel on Climate "there is no clear trend in the annual numbers [i.e. frequency] of tropical cyclones." However, in the North Atlantic there has been a clear increase in the frequency of tropical storms and major hurricanes. From 1850-1990, the long-term average number of tropical storms was about 10, including about 5 hurricanes. For the period of 1998-2007, the average is about 15 tropical storms per year, including about 8 hurricanes. This increase in frequency correlates strongly with the rise in North Atlantic sea surface temperature, and recent scientific studies link this temperature increase to global warming. There is an ongoing scientific debate about the link between increased hurricane activity(and related storm types) and global warming. The 2007 report of the Intergovernmental Panel on Climate Change rates the probability of such a link as "more likely than not". Most agencies around the world today tend to agree that there is a increase in storms that cause hurricanes and other ...read more.

Gustav avoided directly striking major population centers in the U.S. but caused severe flooding and wind damage in more rural areas. * Hurricane Hanna briefly attained category 1 strength but spent most of its life as a strong tropical storm. It struck Haiti on September 1, dropping heavy rains and causing severe flooding and landslides that killed more than 500 people. Hanna was the deadliest tropical storm in the Atlantic so far this year. On September 6, Hanna made landfall in the U.S. near the South Carolina-North Carolina border and caused severe flooding in several states as it moved northward along the Atlantic Coast. * Hurricane Ike made landfall in the Bahamas and Turks and Caicos islands as a category 4 hurricane, causing devastation on some of the islands. Later, Ike made landfall as a category 3 hurricane in Haiti and Cuba, where it killed at least 82 people (mostly in Haiti). On September 13, Ike made landfall in Galveston, Texas, as a strong category 2 hurricane. Galveston and other coastal towns were devastated by wind and storm-surge damage. Wind damage was also severe in nearby Houston, where windows were blown out of downtown skyscrapers. ...read more.

El Ni�o and La Ni�a are both a normal part of the earth's climate and there is recorded evidence of their having occurred for hundreds of years. Is global warming generating other types of severe weather? Global temperature has increased and precipitation patterns have changed over the 20th century as a result of human-induced global warming, resulting in some increases in extremes of temperature and precipitation. According to the IPCC, "increases in the amount of precipitation are very likely in high-latitudes, while decreases are likely in most subtropical land regions," and "it is very likely that hot extremes, heat waves, and heavy precipitation events will continue to become more frequent." Basically increasing sea temperatures caused by global warming lead to it a higher likelihood that the set of conditions required for a hurricane to form are met more frequently seen around the world - El Ni�o just exacerbates this problem as an already unusually hot ocean is just warmed even further...... you can think of global warming as an event that's causing permanent El Ni�o conditions in areas of the world that are unprepared to deal with a large hurricane disaster, so its interesting for us to study El Ni�o as an model for a future global climate ...read more.