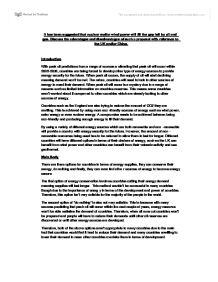 It has been suggested that nuclear and/or wind power will fill the gap left by oil and gas. Discuss the advantages and disadvantages of such a proposal with reference to the UK and/or China.

It has been suggested that nuclear and/or wind power will fill the gap left by oil and gas. Discuss the advantages and disadvantages of such a proposal with reference to the UK and/or China. Introduction With peak oil predictions from a range of sources estimating that peak oil will occur within 2005-2038, countries are being forced to develop other type of energy sources to provide energy security for the future. When peak oil occurs, the supply of oil will start declining meaning demand won't be met. Therefore, countries will need to look to other sources of energy to meet their demand. When peak oil will occur is a mystery due to a range of reasons such as limited information on countries reserves. This means some countries aren't worried about it compared to other countries which are already looking to other sources of energy. Countries such as the England are also trying to reduce the amount of CO2 they are emitting. This is achieved by using more eco-friendly sources of energy such as wind power, solar energy or even nuclear energy. A compromise needs to be achieved between being eco-friendly and producing enough energy to fill their demand. By using a variety of different energy sources which are both renewable and non-renewable will provide a country with energy security for the future. However, the amount of non-renewable resources being used has to be reduced to allow them to last for longer. ...read more.

With the increased nuclear technology being developed, production of nuclear weapons will be increased. The safety of nuclear power has been highlighted in 1986 in Chernobyl where the whole world suffered from the toxic waste which was emitted during the incident. It is thought that modern power stations have been designed to overcome any safety issues and therefore a situation such as Chernobyl will never occur again. This said accidents do occur so it is inevitable that another occurrence of that will occur again in the future. Finally, the costs involved in research and development of these safe power stations and transportation along with the construction of the power plants can cost several billion pounds. In relation to China's views, they like nuclear power due to the high productivity levels of it. This will help them continue their rapid industrialisation of their country for years to come. China is a communist country so therefore they don't care what the population of their country think. This means in terms of nuclear power, they will be able to build these high risk nuclear plants wherever they want without any consultation with its people. China also doesn't care about the environment and global perspective, only about the productivity of the energy source. China is forecasted to create 300 power plants by 2050 which will make them the highest energy producers in nuclear energy. This rapid development of this many nuclear plants has raised issues with the safety levels of the plants and the amount of money being used to do this which is estimated to reach $500 billion to create all 300. ...read more.

Wind power has the least issues surrounding it with the only problems being noise and visual pollution which isn't as bad as the dangers that arise from other types such as nuclear and hydro. Therefore, the UK can benefit from this by building many wind farms to reduce their demand from other countries for fossil fuels. Wind power isn't a suitable source of energy to replace fossil fuels but the aim of them is to gradually reduce our dependence on fossil fuels. This will slow down the expected time of peak oil and demand would be reduced meaning we have even more time to develop other sources of energy to replace fossil fuels. The cheapness and sustainability of the wind turbines makes it easy for the UK to quickly produce them and get instant results without spending lots of money on developing and safety as they would on nuclear plants. Conclusion Each country demands differ and this makes certain types of energy sources suitable and equally some sources not appropriate. China and UK is a perfect example of this as one country wants high productivity levels where as the UK want more sustainable, cheap and eco-friendly options. Each type of multi energy sourcing has its advantages and disadvantages and these need to be evaluated. Each country will have different opinions upon the suitability of different energy sources depending upon what they expect and want. However, every country needs to be prepared for the time when oil supplies begin to run out and there isn't a definite option which is right or wrong. Everyone will have their own opinions and only time will tell who was right. ...read more.