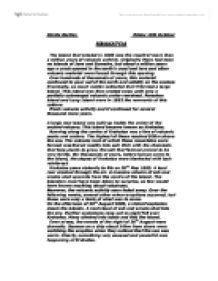 Kirstie Hartley Friday 10th October KRAKATOA The island that existed in 1883 was the result of more than a million years of volcanic activity. Originally there had been no islands of Java and Sumatra, but about a million years ago a crack opened in the earth's crust and lava and other volcanic material were forced through this opening. Over hundreds of thousands of years, this material continued to pour out of the earth and solidify on the seabed. Eventually, so much matter collected that it formed a large island. This island was then eroded away until only a partially submerged volcanic crater remained. Forsaken island and Long Island were in 1883 the remnants of this caldera. Fresh volcanic activity and it continued for several thousand more years. A large new island was built up inside the crater of the ancient volcano. This island became known as Krakatoa. Running along the centre of Krakatoa was a line of volcanic peaks and craters. The highest of these reached 820m above the sea. The volcanic rock of which these mountains were formed weathered readily into soil. ...read more.

Throughout the night of 26th August and the early morning of the following day, explosions continued to shake Krakatoa. The large plume of smoke and ash rose high into the sky. The people who lived on Krakatoa fled the island or tried to seek shelter as best they could. At 10 o'clock am on the 27th August, all the volcanic activity that occurred in the last few hours paled into insignificance as the island blew itself apart. The blast that tore through Krakatoa Island has never since been equalled. The destructive power unleashed by the explosion is estimated to have been 67,000 times more powerful as the atomic bombs dropped on Japan by the USA in 1945 during the Second World War. In an instant, most of Krakatoa simply ceased to exist. A large part of the island sank beneath the sea. The eruption destroyed the island and killed everyone left on shore. Two-thirds of the island were pulverised and thrown 80km high into the air. This immense cloud of dust and rock particles blotted out the sun and spread quickly downwind. ...read more.

For many years the coasts of the islands remained scarcely populated. With their homes and means of earning a living destroyed, the survivors became refugees. The Dutch colonial government stepped in to help. Food was distributed to those left homeless, and aid was given to help them rebuild their lives. Before the terrible explosion of 1883, Krakatoa covered an area of 29 square km. Afterwards it measured only about 10 square km. All life, whether plant or animal was destroyed. Krakatoa lay as a lifeless rock. However, plant seeds were carried to the island by the wind. They took root and soon a lush jungle covered the slopes of the remnants of Krakatoa. Animal such as birds and insects came to the island to take advantage of the rich plant life. However, no people came to live on Krakatoa. They feared fresh eruptions may occur and destroy their homes once again. In 1927, Krakatoa became volcanically active once again. However, there was no repetition of the explosive events of 1883. Instead, slow and steady eruptions piled up lava and ash to form a new island. This small island in known locally as Anak-Krakatau, which means the "Son of Krakatoa."* ...read more.