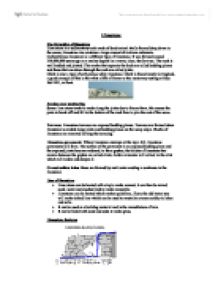 Limestone and it history

Limestone The formation of limestone Lime stone is a sedimentary rock made of dead animal shells formed deep down in the ocean; limestone also contains a large amount of calcium carbonate. Carboniferous limestone is a different type of limestone. It was formed around 350,000,000 years ago as a marine deposit in a warm, clear, shallow sea. The rock is well bedded and jointed. The cracks that separate the beds are called bedding planes and those that run down through the rock are called joints. Chalk is also a type of soft porous white limestone. Chalk is found mostly in England, a good example of this is the white cliffs of Dover or the motorway cutting at Blue Bell Hill, in Kent. ...read more.

The surface of the pavement is an exposed bedding plane and the exposed joints become widened, to form grykes, the blocks of limestone that remain between the grykes are called clints. Acidic rainwater will collect in the clint which will widen and deepen it. Caves/swallow holes: these are formed by melt water eroding a weakness in the limestone Uses of limestone * Lime stone can be heated with clay to make cement, it can then be mixed sand, water and crushed rock to make cconcrete. * Limestone can be heated which makes quicklime, if you the add water you will make slaked lime which can be used to neutralise excess acidity in lakes and soils. ...read more.

Melt water produced a waterfall that cut back the cliff, the erosion took place mainly at the lip of the fall which is why there's a curve in the cliff. After the last ice age the waterfall stopped because the water seeped down into the cracks and fissures, and therefore the water level never rises enough to produce a waterfall again. The cove has distinct vertical ledges, which are a result from variations in the hardness of the limestone layers. Dark vertical stripes are created on the cliff by lichens and mosses as water seeps down the face of the rock. The surface of the cove has a limestone pavement which has deep fissures as a result of chemical weathering, which is mainly acidic rain. The rain seeps down into the cracks and attacks the limestone causing the formation of Clints and grykes. ...read more.