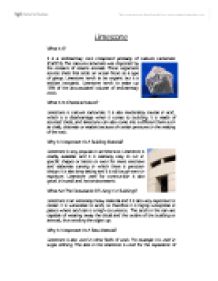 Limestone - What is it?

Limestone What Is It? It is a sedimentary rock composed primarily of calcium carbonate (CaCO3). The calcium carbonate was deposited by the remains of marine animals. These organisms secrete shells that settle on ocean floors as a type of gloop. Limestone tends to be organic but it is seldom inorganic. Limestone tends to make up 10% of the accumulated volume of sedimentary rocks. What Is Its Chemical Nature? Limestone is calcium carbonate. It is also moderately soluble in acid, which is a disadvantage when it comes to building. It is made of secreted shells, and limestone can also come into a different form such as chalk, dolomite or marble because of certain pressures in the making of the rock. Why Is It Important As A Building Material? ...read more.

Limestone is an extremely heavy material and it is also very expensive to obtain. It is vulnerable to acids, so therefore it is highly susceptible in places where acid rain is a high occurrence. The acids in the rain are capable of wearing away the detail and the outline of the building or artwork, thus eroding the object up. Why Is It Important As A Raw Material? Limestone is also used in other fields of work. For example it is used in sugar refining. The lime in the limestone is used for the separation of impurities in the sugar. Limestone is also used in the making of iron in a blast furnace. ...read more.

Why Is It In The Making Of Glass? Glass is made from sand and limestone. Limestone is added before the heating process in which the glass is formed. The limestone in the glass helps protect it from weathering. After the heating process which is done in cool conditions a soda-lime-silica glass product is formed, which is glass, as we know it. Glass is used in almost everything: glasses, windows, mirrors, computers etc. What Are The Environmental Problems Associated With The Use Of It? There are many environmental disadvantages which come with the use of limestone. For example, limestone quarries are large, and it could damage the local environment with its overshadowing and disfigurement of the local beauty. Quarrying is no quiet job. It creates heavy traffic and heavy noise. This completely ruins people's way of life and their daily routine. By Anush Vasireddy ...read more.