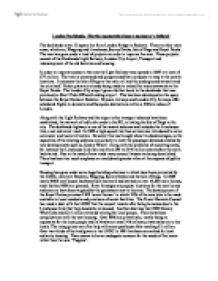 London Docklands. Has the regeneration been a success or a failure?

London Docklands. Has the regeneration been a success or a failure? The docklands cover 22 square km from London Bridge to Beckton. There are four main areas, which are, Wapping and Limehouse, Surrey Docks, Isle of Dogs and Royal Docks. The area has gone under a load of projects on order to improve the area. These projects consist of the Docklands Light Railway, London City Airport, Transport and redevelopment of the old factories and housing. In order to improve access to the area the Light Railway was opened in 1987 at a cost of �77 million. The train is unmanned and programmed by a computer to stop at the certain locations. It connects the Isle of Dogs to the main rail and the underground network and the city itself. Future plans are already being made to extend the route eastwards to the Royal Docks. The London City airport gave a further boost to the docklands that was previously a Short Take Off and Landing airport. ...read more.

The development of the Royal Docks promises 1500 'social homes' in which 25% of the new jobs to be made available to local residents and provision of social facilities. The Tower Hamlets Council has made a deal with the LDDC that the council tenants after being homeless due to the Limehouse Link that they should be re-housed. Another deal was that 2000 Canary Wharf jobs and �2.5 million towards training for local people. There have been complications with the new housing. Over 80% are private sale, mostly being to expensive for the local people and in Newham a small 4% of new private sales are to the locals. The rising prices are of no help with some penthouse flats reaching �1 million. Over two-thirds of the land given to the LDDC in 1981 has been earmarked for local authority housing. There seems to be an inadequate concern for the needs of the locals rather than the new 'Yuppies'. ...read more.

Problems have been caused due to the money going to the LDDC such as, local councils have had their resources cut back by rate capping and capital spending controls. The LDDC have faced criticism from local boroughs, community groups and organizations like the Docklands Community Council for its lack of democracy, local consultation and communication. If the London Dockland rejuvenation was a success or failure is remains to be seen. The Docklands has been described as a test bed of government policy but the position of the Docklands being next to the city of London it is hard to see it being repeated. After this rejuvenation of the Docklands has left two environments that exist side bi side, one luxurious for wealthy incomers and the other unfounded estates, parks and community facilities where the locals live. If the two will ever merge it is something we will have to wait and see. I believe however that the rejuvenation has had it successes as before there was nothing going for the area at all. ...read more.