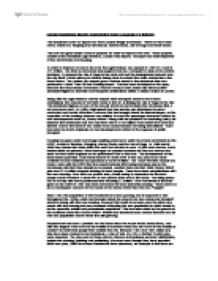 London Docklands - Has the regeneration been a success or a failure?

London Docklands. Has the regeneration been a success or a failure? The docklands cover 22 square km from London Bridge to Beckton. There are four main areas, which are, Wapping and Limehouse, Surrey Docks, Isle of Dogs and Royal Docks. The area has gone under a load of projects on order to improve the area. These projects consist of the Docklands Light Railway, London City Airport, Transport and redevelopment of the old factories and housing. In order to improve access to the area the Light Railway was opened in 1987 at a cost of �77 million. The train is unmanned and programmed by a computer to stop at the certain locations. It connects the Isle of Dogs to the main rail and the underground network and the city itself. Future plans are already being made to extend the route eastwards to the Royal Docks. The London City airport gave a further boost to the docklands that was previously a Short Take Off and Landing airport. This has been developed on the quay between the Royal Docks at Beckton. Brymon Airways and London City Airways offer scheduled flights to domestic and European destinations within a 600km radius of London. Along with the Light Railway and the airport other transport schemes have been established, the network of red brick roads in the EZ, is linking the Isle of Dogs to the city. The docklands highway is one of the newest schemes and includes the Limehouse link, a cut and cover road. In 1988 a high-speed river bus service was introduced to serve commuter and tourist attraction. However this has brought about its disadvantages, as the capacities of the existing schemes are unlikely to meet the passenger demands created by new developments such as, Canary Wharf. Along with the problems of escalating costs, for instance the Limehouse Link has rose from �85 to �140 million even before the work had started. ...read more.

There were terraced housing in most places of the London Docklands. This meant there was not much lure for normal families to come there and also the workers would not have liked it. The houses were built fairly fast in the past, so they were not very hard wearing at all. These needed to be replaced. Even when the Docklands were a good market place, their image was of a run-down town. What the whole area needed was a nicer image as an attractive place to come and work and live with your family. Entertainment and activity centers were needed to put this image on to appeal to the families of workers to come there to live and also work, and educate their young. The LDDC was formed as a result of regenerating the London Docklands. LDDC stands for London Docklands Development Corporation. They invested 1.86 billion pounds into the whole project. Transport was the main investment, where nearly half of the money went. The Docklands Light Railway was improved and extended to go into other parts of London. It was also made more reliable so that it could carry more passengers. Five new stations were also developed. 72 miles of new roads were also built in the Docklands leading into other parts of the London, and some roads were improved. Pedestrianisation also took place, where high specification pedestrian and cycle networks were placed, with special help to disabled people. The new train system also is extended to go to the London City airport, so there is access between countries. The Government also invested 159 million pounds into utilities in the Docklands. These included drainage and electrical supply for houses and other buildings. There was not much of this before, so this is a sufficient. The Corporation also acquired 2042 acres and is turning some of it from Greenfield, into Brownfield. This means more houses and Businesses can be set up. ...read more.

spring 1999, carries 22,000 people an hour in each direction and connects London Docklands directly with London Bridge and Waterloo BR stations and the West End. Utilities: The Docklands now have utilities such as drainage and electricity supply - in which they were previously lacking of. It has a more efficient energy supply, and electricity supply that has heat and energy, both through local networks. Environment: It now has elegant footbridges to ease the barrier effect. Water sports facilities have been provided in every dock. Well funded arrangements have been made to secure these services. The wildlife and their habitats are being protected there as well. There is an ecology park at Bow Creek and a wildfowl sanctuary at East India Dock Basin. There is an attractive environment there, with high quality of urban design, street furniture, public art, open spaces. There are 160,000 trees planted. The docklands has received 94 awards for excellence in landscaping, planning, architecture and conservation. Commercial Development: There is a commercial/office market in Docklands. It attracted a lot of investment and international businesses. The docklands had led to the start of a new business district for London, including the Canary Wharf development as its centre-piece. Housing: In 1981 housing in the UDA was of poor quality and in short supply. * Overcrowded. * Poor or uninhabitable condition. * Housing was rented, mostly through the local authorities. Owner occupation was 5% The proportion of home ownership has leapt from 5% to 45% - still below the Londonaverage. Community Infrastructure: A lot of the money from the Docklands was invested on education and training and on health and other community activities, which include: * Tower Hamlets College * Bacon's College * 12 new primary schools * Extension and improvements to 17 other schools * Provision of IT equipment for the schools in London Docklands * The Butler's Wharf Chef School * 5 new health centers and 6 refurbished existing health centers, plus social care facilities, including three children's day care centers ...read more.