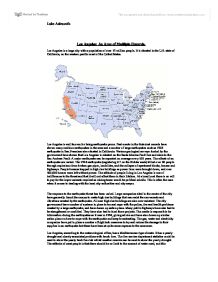 Los Angeles: An Area of Multiple Hazards. Los Angeles is a large city with a population of over 13 million people. It is situated in the U.S. state of California, on the western pacific coast of the United States. Los Angeles is well known for being earthquake prone. Past events in the historical records have shown many medium earthquakes in the area and a number of large earthquakes such as 1906 earthquake in San Francisco also situated in California. Various geological surveys funded by the government have shown that Los Angeles is situated on the Santa Monica Fault line and close to the San Andreas Fault. A major earthquake can be expected on average every 100 years. The effects of an earthquake are varied. The 1994 earthquake (registering 6.7 on the Richter scale) killed over 60 people through explosions from broken gas pipes, landslides, and the collapse of apartment blocks, houses and highways. People became trapped in high rise buildings as power lines were brought down, and over 500,000 houses were left without power. The attitude of people living in Los Angeles is one of indifference to the threat and that it will not affect them in their lifetime. At a local level there is no will to pay for the improvements required as raising taxes would be political suicide. ...read more.

It is rare for soil stabilisation to be carried out due to its expense, so mostly this is privately funded. The response of the city government has been to restrict development on steep slopes and other risky areas and have therefore carried out risk analysis of many areas. Flooding is a hazard occurring in the winter especially during heavy rains and storms. Deforestation, brush fires and urbanisation have tended to exacerbate the problem by reducing interception and percolation and increasing surface run-off Houses and any other structures on the flood plains are at most risk and can be carried all the way out to sea in severe storms. Loss of life is not usually high although eight people were killed in 1992. The problem is similar to that experienced with the brush fires, in that people want to live on the flood plains where risk is at its highest. The land which is flooded is economically very valuable and therefore the state government has launched a number of schemes to reduce the risk. A number of large dams have been built to try and hold back the water but only limited success has resulted, and many stretches of river have been enclosed in reinforced levees. Air pollution is a major hazard in Los Angeles. ...read more.

Finally as with most large cities there is the hazard of sexually transmitted diseases (STDs) such as HIV and other infectious diseases such as Tuberculosis (TB)and influenza (flu) due to the high density of population. The health authority has accurate records of the extent of these problems. TB and flu are becoming major problems as TB is highly infectious and is becoming more difficult to treat as is has developed resistance to antibiotics. It is responsible for many hundreds of deaths especially in the poorer areas that have limited access to medical care. HIV is also becoming more prevalent as it can remain undetected for years by which time many other people could become infected, There is no effective treatment and the death toll rises every year. The response of the national government to STDs has been to educate the young on the importance of contraception as a preventative measure, but still many people do not know how it is transmitted. In the case of TB poor living conditions, especially damp housing makes people more susceptible to infection. The approach to the TB problem has been to vaccinate people where possible, whereas with flu only those most at risk such as the young and elderly are vaccinated. The response of people is often to avoid the poorer areas. However immigrants are rarely vaccinated and therefore infection may still be able to spread in the wider community. ?? ?? ?? ?? Luke Ashworth ...read more.