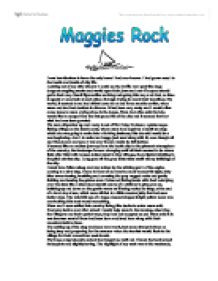 I was heartbroken to leave the only home I had ever known. I had grown used to the hustle and bustle of city life. Looking out of my attic window I could see the traffic roar past like huge dragons coughing smoke and would open their jaws and roar if anyone should get in their way. Small figures like working ants going this way and that, no time to speak or even look at each other, through trying to reach their deadlines. My world, it seemed to me had all but come to an end three months earlier, when mum and dad had decided to divorce. It had been very nasty and I would often come home to mum crying alone in the house. Mum had often said that she would like to escape from the fast paced life of the city and it seemed that her wish had now been granted. We were all packed up and ready to set off for Foley Harbour, a picturesque fishing village on the South coast, where mum had acquired a small tea shop which she was going to make into a thriving business, this she said would be a new beginning. And I to make her happy just went along with it; even though all my friends and everyone I had ever known would be left behind. ...read more.

As I approached the headland of the harbour I noticed a beautiful young woman sat on a large rock, her long auburn hair cascading around her fine and featured pale face, staring motionless out to sea. She appeared almost like a statue and not wanting to disturb her for she seemed to be in deep and private thought, I turned away and walked slowly back to where the fishermen were laughing and telling fishy tales with good humoured banter, now and again casting a glance my way with a cautious smile. As the weeks past by I got to know the fishermen better and better, they would wave and beckon me to join in with them and help them sort the glistening and slimy fish in to large wicker baskets, their large poppy out eyes staring as if knowing this would be their last journey to the large fish markets in the nearby town. After they had finished their jobs, they would sit on the rocks pushing the brown grass like tobacco into their pipes and puffing out clouds of pleasantly smelling aroma whilst telling me fascinating tales of shipwrecks and smuggles. One such tale was about childhood sweethearts Joe Price, a young fisherman, and Maggie Turner, who's love for each other was well known all through the village. ...read more.

In my minds eye I imagined Maggie waiting down by the rocks. I slept late into the afternoon. My mind was still thinking about Maggie, so I decided to go for a peaceful walk down by the harbour, just for some fresh air and to clear my mind. The beach was littered with seaweed, drift wood and wreckage left over from the previous nights storm. Out of the corner of my eye something glistened amongst the debris. I bent down to pick it up, brushing away the wet sand, wondering if it had been washed ashore with the storm. It was a gold heart shaped locket, the chain of which was damaged. I gently prized it open, to my amazement it contained the photographs of two young people, one of which I had seen before. Maggie! Engraved on the back where the words 'Our hearts entwined' I could feel the tears streaming down my checks. It was then I realised that Joe had probably been lost at sea. This could explain why Joe never attended Maggie's funeral. I knew in my heart that I could never keep the locket, it belonged with Maggie. I decided to go back to the rock where I saw Maggie and carefully placed the locket there. I often walk along the beach with my own children now and visit the rocks where I once saw Maggie. I have never seen Maggie's spirit since that day, and hope that Maggie and Joe's spirits have now found everlasting peace together. ...read more.