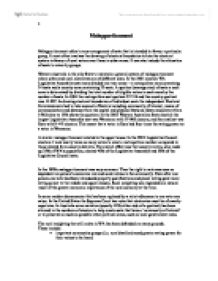 Malapportionment Malapportionment refers to any arrangement of seats that is intended to favour a particular group. It most often involves the drawing of electoral boundaries to bias the electoral system in favour of rural voters over those in urban areas. It can also include the allocation of seats to minority groups. Western Australia is the only State to maintain a general system of malapportionment where urban and rural electorates are of different sizes. In the 2001 election WA Legislative Assembly seats were divided into two zones - a metropolitan zone containing 34 seats and a country zone containing 23 seats. A quotient (average size) of seats n each zone is determined by dividing the total number of eligible voters in each zone by the number of seats. In 1994 the metropolitan seat quotient 22 746 and the country quotient was 11 887. In drawing electoral boundaries of individual seats the independent Electoral Commissioners had to take account of factors including community of interest, means of communication and distance from the capital and physical features. ...read more.

Rural weighting was regarded as a natural result of the greater economic importance of the rural economy at the time. In some modern democracies this has been replaced by a strict adherence to one vote-one value. In the United States the Supreme Court has rules that electorates must be of exactly equal size. In Australia some variation (usually 10% either side of a quotient) has been allowed in the numbers of electors to help create seats that have a 'community of interest' or to preserve as much as possible other political zones, such as local government areas. The rural weighting that still exists in WA has been defended on many grounds. These include: * important community groups (i.e. rural dwellers) need greater voting power for their voices to be heard * rural areas still contain the industries that generate the largest proportion of WA's economic output (farm and mineral exports) * it is difficult for members of parliament to service large and remote electorates * if factors such as 'community of interest', other boundaries and physical features are ...read more.

Reform of electoral boundaries has been a long-standing Labor Party policy. The Liberal Party highlighted this difference between the parties in an attempt to maintain its support in non-metropolitan seats. After it election victory the new ALP State government began the debate by floating a reform proposal to create a uniform quotient of 21 000 voters for all Assembly seats (with a 10% variation allowed around this average). Its preferred option for the Legislative Council would be to divide WA into five zones with a total of 34 seats although there are proposals to increase this number to 36. Twenty-one of these would be the three metropolitan zones (with some outer metropolitan seats included as part of the non-urban zones). Two Bills were involved, the Electoral Distribution Repeal Bill 2001 and the Electoral Amendment Bill 2001. Both Bills passed through the lower house but they did not, however, gain an absolute majority in the Legislative Council (18 votes). In the end, this legislation failed to be passed and WA's lower house electoral boundaries have since remained unchanged. 1 ...read more.