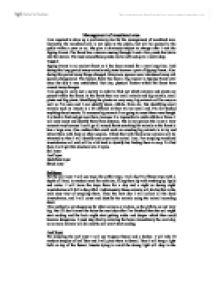 Management of woodland area I am required to draw up a preliminary plan for the management of woodland area. Currently, the woodland area is not open to the public, but will be opened to the public within a year or so. My plan is obviously subject to change after I visit the Epping Forest. The forest has a stream running through it and a few ponds that drain into the stream. The mud around these ponds can be soft and up to a meter deep. Task 1 Epping Forest is an ancient forest as it has been around for a very long time. And during this long period many animals and plants became a part of Epping Forest. Also during this period many things changed. Many new species were introduced many old species disappeared. The human factor has been a big impact in Epping Forest ever since the day it was established. But also, physical factors within the forest have caused many changes. I am going to carry out a survey in order to find out which animals and plants are present within the forest. In the forest there are small animals and big animals, small plants and big plants. Identifying the plants are very easy, big animals will be easy as well as I've seen and I can identify deers, rabbits, foxes etc. But identifying small animals such as insects is a bit difficult as they are too small and I've not studied anything about insects. To measure big animals I am going to count them even though it is hard to find and get near them, because it is impossible to catch rabbits or foxes. I will only count and identify them from distance. But in my opinion this is not a very accurate way because I can't go all around forest searching for animals as the forest is has a large area. ...read more.

If young plants are damaged then they will start to die. Visitors should be reminded that breaking the branches of the plants is against our rules. There will be notices in the forest to remind the visitors that they will be asked to leave the forest if they are caught breaking the branches. WHAT IT IS? Exhaust gases from cars WHAT EFFECT? It causes pollution which can lead the death of plants and animals it can also cause the greenhouse affect. HOW IT AFFECTS MY ECOSYSTEM? Pollution can affect the whole ecosystem. It affects the air, the plants, the animals, the ponds everything. Pollution would destroy the ecosystem entirely. And I do not want this happening anywhere. If the ecosystem is polluted then it won't even be an attractive place anymore but instead it will be one filthy place. This affect is again caused by the visitors that bring with them their cars. The exhaustion of these cars will cause pollution because all the chemicals will spread around affecting the air which is to most important factor for both plants and animals. If the air is polluted then everything will be unhealthy in the ecosystem. HOW CAN I PREVENT IT? To minimise the risk of this dangerous factor I will have to carefully think of what should be done about it. If its cars that will cause all this, then there shouldn't be any cars near the forest. If the car park is near the forests then it should be removed in a different place far from the forest. There should be a sensible distance from the car parks to the forest. The car park should be about 800 meters away from the forest. The visitors will have to walk for a while but the ecosystem I should try and minimise every possible risk. WHAT IT IS? Animal grazing, including damage by animals that are naturally there. ...read more.

Plants prefer warm temperatures because photosynthesis occurs faster ; I would use the new high tech equipment to measure the humidity in the forest. I would measure the rainfall using the rain gauge; I would measure the light intensity with a light meter, because the quadrate method is not accurate. I would also measure the wind speed using anemometer and its direction using a weather vane. To measure the soil samples I add some water to the soil sample and then I would stick the pH sticker in the slurry. If I was to do these tasks again I would do them in more than two different sites because it would give more accurate results I would probably find more species and I would gain more knowledge about the plants and animals present in the forest. How site 1 varies from site 2 The two different locations that we collected data from vary from each other. In site one there is more trees than in site 2. Also the vegetation in site the vegetation varies between the two sites. In site 1 was mainly Leaf litter; there was also a lot of bare ground. There was a little a bit of Moss, Bracken and Water pepper. There was no Bramble and no Grass. Site 2 was also mainly Leaf litter even though there wasn't as much as in site 1. Then there also was a lot of bare ground like in site 2, and quiet a big amount of Grass. There was also a very little amount of Bramble and Water pepper. But there was no Moss and no Bracken. Also the soil was a bit different because in site 1 on the surface the soil colour was dark brown and it was soft, 15cm deep it was greyish and it was gritty, 30cm in the soil the colour was golden and the soil was gritty. In site 2 the soil on the surface was dark brown as well but it was smooth soft. ...read more.