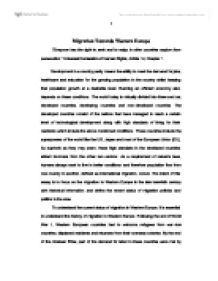 Migration Towards Western Europe "Everyone has the right to seek and to enjoy in other countries asylum from persecution." Universal Declaration of Human Rights, Article 14, Chapter 1. Development in a country partly means the ability to meet the demand for jobs, healthcare and education for the growing population in the country whilst keeping that population growth at a desirable level. Running an efficient economy also depends on these conditions. The world today is virtually divided into three sectors; developed countries, developing countries and non-developed countries. The developed countries consist of the nations that have managed to reach a certain level of technological development along with high standarts of living for their residents which include the above mentioned conditions. These countries include the superpowers of the world like the US, Japan and most of the European Union (EU). As euphoric as they may seem, these high standarts in the developed countries attract incomers from the other two sectors. As a requirement of nature's laws, humans always want to live in better conditions and therefore population flow from one country to another, defined as international migration, occurs. The intent of this essay is to focus on the migration to Western Europe in the late twentieth century with historical information and define the recent status of migration policies and politics in the area. ...read more.

Thus, these asylum seekers have become a major problem for the Western European countries who had to face an ethical dilemma; either to accept the incoming refugees and grant them asylum for the sake of humanity or generate new policies in order to restrict the flow of incomers. In the end, the western countries had to look for ways to deal with this problem because the numbers did not seem to end. Therefore, the countries who had the most amount of incoming refugees, namely the UK, Germany, France, Belgium, Netherlands, Switzerland, Austria and Sweden began creating strict policies dealing with refugees and redefining their policies about other forms of migration by the 90's. The reasons and motives -other than a need to escape from hostilities- behind this pattern of migration can be collected in several major headlines even though they vary from one country to another. Among these, the push factors include economic decline, increase in unemployment, political instability and population growth. On the other hand, the most significant pull factor is that almost all Western European countries are now hosts to considerable amounts of immigrant population which means that the immigration routes to these countries have already been opened up in the past. ...read more.

A more effective regime can only be applied with a clear and realistic understanding of every country's capacities, needs and pressures. If the fact that a more long-term and equal policy will benefit every country in the long run becomes recognized and appreciated by all nations, then politicians will be able to carry proposals concerning migration that were seen to be unpopular in the past. Since migration will never stop, the most sensible thing to do is to develop an efficient management system that will bring order to the whole picture of migration towards Western Europe. Only then will the governments can focus on the benefits and minimize any negative effects that may come up in the future. In conclusion, it can be stated that migration occurs anywhere, anytime. It is seen as a normal part of life within the borders of a state since people always have the right to look for jobs or opportunities elsewhere. However, since we live in a world divided into nation states, migration from one state to another is seen as an unwanted and disruptive fact. Yet, the modern world is moving on everyday with the effects of the globalization wave and borders are becoming less and less important everyday. Therefore, in order to move along with the wave rather than get trampled in it, a commitment to the challenges that it brings is a vital necessity. ...read more.