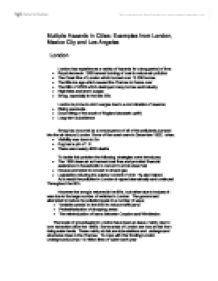 Multiple Hazards in Cities: Examples from London, Mexico City and Los Angeles London London has experiences a variety of hazards for a long period of time. * Royal decree in 1306 banned burning of coal to reduce air pollution * The Great Fire of London which burned over 13 200 homes * The little ice age which caused the Thames to freeze over * The Blitz of WW2 which destroyed many homes and industry * High tides and storm surges * Smog, especially in the late 50's. London is prone to storm surges due to a combination of reasons; * Rising sea levels * Down tilting of the south of England (isostatic uplift) * Long-term subsidence. Smog has occurred as a consequence of all of the pollutants pumped into the air around London. Some of the worst were in December 1952, when; * Visibility was down to 5m * Fog had a pH of 1.6 * There were nearly 4000 deaths. To tackle this problem the following strategies were introduces; * The 1956 clean air act banned coal fires and provided financial assistance to households to convert to smokeless fuel * Houses prompted to convert to oil and gas * Legislation reducing the sulphur content of oil to 1% also helped. ...read more.

The main hazards are as follows; * Earthquakes * River flooding * Coastal flooding * Drought * Fires * Mass movement ( mudslides, landslides) * Smog * Crime and gang warfare * Racial violence. Minor tremors are common in the region, but since 1933 there have been five earthquakes that have measure at least 5.8 on the Richter scale. The largest of which was the Northridge event that measured 6.8 and killed 57 people, whilst causing $30 billion in damage. L.A is densely populated which accounts for the high loss of life and damage. As it has become very important that both people and buildings are protected, the following schemes have been adopted. * Mapping the geological structure, ( mapping of all faults and predicting in the future) * Land-use planning, the placing of schools and hospitals in low risk areas * Hazard-resistant structures, counterbalancing and X-bracing etc. * Fire prevention, 'smart metres' cut off gas in the event * Emergency service readiness, equipment is distribute throughout the city. * Education and planning, there are classes in schools and on TV to educate people in what to do in the event of an earthquake. ...read more.

E.g. in 1989 in a single week a typhoon caused 167 deaths, and 50 000 were made homeless. Landslides are also common due to illegal logging on the hillsides. There have been many seismometers placed around the islands to try and detect when volcanoes are going to erupt, but there is no way of stopping them. * Satellites offer the prospect of global coverage from space * Hazard zonation maps * The monitoring of active volcanoes all help in managing the crisis when it has happened. Flooding is common in the Philippines due to tsunamis and typhoons. Lowland floodplains can't cope with the huge amounts of water. The result of flooding e.g. in July 1972, 600 were left dead, 370 647 were left homeless and 200 000 ha of crop land was destroyed. This resulted in �20 million of damage to roads, bridges and infrastructure. Drought is also a problem as there are often several months with very little rainfall (up to 40% less). The last significant drought was in December 1986 when most of the country was affected. In 1989 a drought weakened the economy with a loss of agricultural production, just before the 1990 earthquake and the 1991 eruption. ...read more.