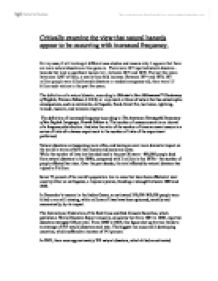 Natural disasters are happening more often, and having an ever more dramatic impact on the world in terms of both their human and economic costs. While the number of lives lost has declined in the past 20 years - 800,000

Critically examine the view that natural hazards appear to be occurring with increased frequency. For my essay I will looking at different case studies and reasons why it appears that there are more natural disasters as time goes on. There were 497 reported natural disasters - hazards that took a significant human toll - between 1974 and 1978. The last five years have seen 1,897 of them, a nearly three fold increase. Between 1974 and 1978, 195 million people were killed by such disasters or needed emergency aid; there were 1.5 billion such victims in the past five years. The definition of a natural disaster, according to Webster's New Millennium(tm) Dictionary of English, Preview Edition (v 0.9.6) is: any event or force of nature that has catastrophic consequences, such as avalanche, earthquake, flood, forest fire, hurricane, lightning, tornado, tsunami, and volcanic eruption. The definition of increased frequency according to The American Heritage(r) Dictionary of the English Language, Fourth Edition is: The number of measurements in an interval of a frequency distribution. And also the ratio of the number of times an event occurs in a series of trials of a chance experiment to the number of trials of the experiment performed. Natural disasters are happening more often, and having an ever more dramatic impact on the world in terms of both their human and economic costs. ...read more.

As transport as increased people have become more spread out across the world. This has meant that more people have experienced these events first hand or been involved in a natural disaster. As population increases people are forced to expand and move out of largely populated cities. This means that natural hazards have been found more commonly as more people are about to find them and experience them. This has been found all over America as people have moved from state to state more hazards have been occurring, but this is simply because there have been more people affected by hazards. Since 1988, the Centre for Research on the Epidemiology of Disasters has kept a worldwide emergency database of disasters, called EMDAT. This contains essential information about over 14,000 disasters in the world, dating from 1900, up to the present day. Natural disasters are divided into three specific groups: hydro-meterological (or weather-related), geophysical and biological. See links for detailed definitions. EMDAT's data shows that, over the past decade, the number of natural and technological disasters has risen sharply. Both hydro-meteorological and geophysical disasters have become more common, becoming 68 percent and 62 percent respectively more frequent over the decade. This reflects longer-term trends. Weather-related disasters still outnumber geophysical disasters by nine to one over the past decade, according to the Federation's analysis, while floods are the most-reported natural disasters in Africa, Asia and Europe. ...read more.

Even if a project such as this could be carried out, it still would not protect the Bengali people from flooding from locally occurring monsoons and cyclones. The biggest problem with Bangladesh is the geographical fact that most of the land is only a few feed above water and very unstable. No amount of river control can change this. Bangladeshis only choice must be severe population controls to reduce the density of people on this land and also to encourage a movement away from the lowest lying areas. In conclusion I would say that natural hazards are appearing to be on the increase due to human influences such as mass deforestation in Bangladesh. Due to improved media and transport natural hazards are better documented therefore making it appear that there are more hazards today then in the past decades. We must however take into consideration the affect of global warming another human influence, which has been partly blamed for an increase of natural hazards especially floods. If the evidence proves to be correct, man made gasses have had a crucial effect on the amount of natural hazards suggesting that an increase of global warming has lead to an increase in natural hazards, therefore suggesting that media coverage and transport improvements has not been the main benefactor of the increase of natural hazards. ...read more.