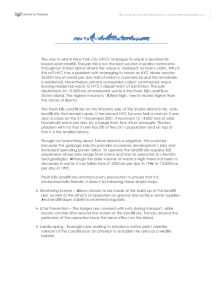 New York - Environmental inequality The way in which New York City (NYC) manages its waste is dominantly based upon landfill. Though this is not the best solution is sparks controversy throughout Staten Island where the waste is 'dumped' as many claim. Why is this so? NYC has a problem with managing its waste as NYC alone creates 26,000 tons of waste per day half of which is commercial and the remainder is residential. Nevertheless, private companies collect commercial waste leaving residential waste to NYC's department of Sanitation. The sole destination for 13,000tons of residential waste is the Fresh Kills Landfill on Staten Island. The highest mound is 180feet high, twenty inches higher than the statue of liberty! The Fresh Kills Landfill site on the Western side of The Staten Island is the -only- landfill site that remains open. It has served NYC for over half a century it was due to close on the 31st December 2001. It received 12-14,000 tons of solid household waste per day, by a barge from four other boroughs. ...read more.

Fences around the perimeter of the operation have the same effect on the island. > Landscaping - Ecologists are working to introduce native plant varieties tolerant of the conditions in an attempt to establish the area as a wildlife habitat. > Leachate Treatment Plant - To prevent percolating rainwater from becoming contaminated the plant removes pollutants prior to the water being returned to the waterways. > Construction Debris Recycling Area - Processes 750tons per day of debris, e.g. concrete, asphalt and soil. Steel is extracted from the process and sold for recycling. The product is used to construct the roads throughout the landfill site. > Composting Facility - Garden waste is collected and turned into compost. It is used in the landscaping process around the site. It is also made available to the public free of charge. > Landfill Gas Recovery - Consisting of primarily methane and carbon dioxide, landfill gas is collected and customized at the facility onsite. The methane is purified into pipeline quality gas, which is then sold to a local company. ...read more.

It is the largest manufacturing project in NYC in 50years. It employed 1,000people during construction and now has a labour force of 115. Also, NYC's mayor has pledged to not build or renovate any incinerators in the city. But then again, there are still problems because what is proposed of the commercial waste which accounts for the other half? After 2001, it will be recycling waste prevention and waste reduction schemes as good as they all may be, is it really probable that they will be able to 'absorb' 13,000tons of waste on a daily basis? One person who is not convinced is the state Governor of Pennsylvania, Tom Ridge. Garbage Importers & Exporters The state of Virginia is a number two importer after Pennsylvania, with NYC accounting for 60% of Virginia's imports. A survey by Virginia Commonwealth University found that 87% of people were keen to limit garbage imports with only 9% opposing. Mainly the ones opposing argued that there would be a loss of revenue and would hurt communities where garbage is a big business. With imports totalling 4million tons per year there is hardly... ...read more.