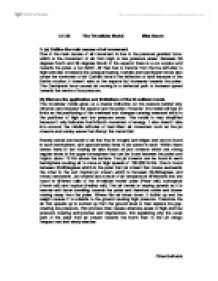 Outline the main causes of air movement. Discuss the application and limitations of the tri-cellular model.

4.1.1b The Tri-cellular Model Miss Gaunt 2. (a) Outline the main causes of air movement. One of the main causes of air movement is due to the pressure gradient force, which is the movement of air from high to low pressure areas. Between 38 degrees North and 38 degrees South of the equator there is a net surplus and towards the poles, a net deficit. Air then has to transfer from the low latitudes to high latitudes to balance the unequal heating. Coriolis and Centripetal forces also cause the movement of air. Coriolis force is the deflection of wind because of the Earths rotation, it doesn't exist at the equator but increases towards the poles. The Centripetal force causes air moving in a deflected path to increase speed towards the centre of low pressure. (b) Discuss the application and limitations of the tri-cellular model. ...read more.

One is found between 30-50degrees which is the polar front jet stream that moves eastwards the other is the sub tropical jet stream which is between 20-30degrees and moves westwards. Jet streams are a result of air temperature differences that are found at different cells of the tri-cellular model: polar (Polar cell), subtropical (Ferrel cell) and tropical (Hadley cell). The air travels at varying speeds as it is warmer and faster travelling towards the poles and therefore colder and slower moving away from the poles. Where this air slows down, it builds up and the weight causes it to subside to the ground causing high pressure. Therefore the air that speeds up is sucked up from the ground level to then replace the gap, creating low pressure. This process then causes alternate areas of high and low pressure creating anticyclones and depressions, this explaining why the usual path of the polar front jet stream towards the North East to the UK brings frequent wet and windy weather. ...read more.

As the rest of the air continues to rise pole wards to the Polar cell it loses heat and therefore descends which makes high pressure and dry, stable conditions. The air returning to the polar front is also known as cold easterlies. The friction of the earth's surface is not taken into account with the tri-cellular model as this decreases the wind speed and then modifies its direction. The coriolis and centripetal force also limit the model as they affect the air movement. The coriolis force is the deflection of wind due to the Earth's rotation, it is deflected to the right in the Northern Hemisphere and to the left in the Southern Hemisphere. However it doesn't exist at the equator, it only increases towards the poles. The centripetal force is the air moving towards a low pressure area in a deflected path that then increases towards the centre of low pressure. ?? ?? ?? ?? Chloe Borthwick ...read more.