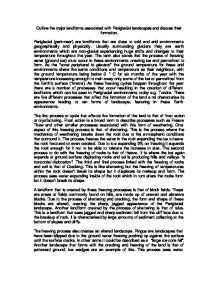 Periglacial (peri=near) are landforms that are close to cold and arid environments geographically and physically. Usually surrounding glaciers they are earth environments which are non-glacial experiencing huge shifts and changes to their temperature throughout the year. The term also states that the process of freezing water (ground ice) must occur in these environments creating ice and permafrost to form. As the “zone peripheral to glaciers” the ground temperature for these arid environments share the same conditions and temperature as their neighbour, with the ground temperature being below 0 o C for six months of the year with the temperature increasing enough to melt away only some of the ice or permafrost from the Earth’s surface (1metre). As these freezing cycles happen throughout the year there are a number of processes that occur resulting in the creation of different landforms which can be seen in Periglacial environments today e.g. Tundra. There are five different processes that affect the formation of the land and characterise its appearance leading to ten forms of landscape, featuring in these Earth environments.

The first process or cycle that affects the formation of the land is that of frost action or cryofacturing. Frost action is a broad term to describe processes such as Freeze Thaw and other smaller processes associated with this form of weathering. One aspect of this freezing process is that of shattering. This is the process where the mechanics of weathering breaks down the rock due to the atmospheric conditions that surround it. The process freezes the water in the rock expanding the ice to leave the rock fractured or even cracked. Due to ice expanding 9% on freezing it expands the rock enough for it not to be able to tolerate the increase in size. The second process to do with the freezing of rocks is that of Heave. It is where the ice again expands at ground surface displacing rocks and soils producing hills and valleys “a horizontal dislocation”. The third and final process linked with the freezing of rocks and soil is that of Cracking. This is like shattering but the freezing of temperatures within the rock doesn’t break its shape but it displaces its makeup and form. The process sees water expanding inside of the rock which in turn alters the rocks form but it doesn’t break its shape.

A landform that is created by these freezing processes is that of block fields. These are areas or fields commonly found on hills, are made up of uneven and abrasive blocks. Due to the process of shattering and cracking, the form and shape of these blocks are altered, creating the sharp, jagged appearance of the Periglacial landscape. Another landform created by the process of shattering is that of talus. This is a landform that sees jagged and sharp sediment fall from the cliff face due to the breakup of rock. It is characterised by large amounts of sediment collecting at the bottom of slopes and cliffs.

The heaving process also creates an altered landscape. Pingos are landscapes that have been blipped due to the ground water freezing pushing up against the surface until the surface cracks. In other terms it could be described as a “large ice core hill”. Another landscape that forms with the cracking and heaving of the land is that of patterned ground. Ice wedges are an example of this. This process sees water entering the cracks of the rock in the summer then freezing in the water expanding the rock and altering its shape enlarging the rock.

Moving away from the freezing processes, the process of mass wasting is another process creating landforms on the Periglacial map. This process sees the occurrence of contraction and expansion of the ground soil displacing the land and creating blips within the topography of the environment. Gelifluction another subject within the mass wasting process sees the downslope movement of rock again affecting the topography of the land. This process leads to avalanches and landslides as the rock or soil below the surface moves downslope the surface soil follows along with everything sitting on top of this. Another landform that is due to the process of gelifluction is that of gelifluction lobes. This sees the land bulge and creates a “staircase profile”.

Rock streams are created on the slopes of block fields. They are created by the process of gelifluction which sees the downslope movement of rocks and soils. These are areas of rock and soil that are constantly active moving and changing shape on the slopes of the Periglacial environment.

Another process affecting the topography of the land was that of nivation. Nivation is a process that sees the snowfall venture into the warmer climate. This creates a problem as the warmer climate melts this snow and the dry snow that fell during the colder season is also melted creating slush. This slush is heavier and thicker than normal dry winter snow creating avalanche plunge pools and devastating avalanches again heavily affecting the topography of the land.

Fluvial processes also affect the landscape of Periglacial environments. Throughout the year the weather means that there is little or no rain. This is due to the rain that does fall, falling as snow or being frozen within the atmosphere. However, during the melt season a large amount of water is released from the ice creating floods. These floods turn what were in the winter season fields of ice, to river channels. These braided channels carry a high amount of sediment eroding the banks of the river widening its course. The river channels created are very wide but also very shallow.

These Glacier floods and surges can cause the increase in sea level rise. This would change the topography of the land as it may be under water not just for the summer but the winter as well. Glacier floods can also trigger earthquakes and even volcanoes such as the one experienced recently from Iceland. As the world’s temperature increases the likely hood of the melting of the glaciers increases thus the sea level will continue to increase. An example of this is the glacier surge in Iceland in 1996 costing the country $15million.

The final process is that of eolian. This is a process that occurs with the lack of vegetation cover. This leaves large areas exposed to the elements. As strong winds accompany the low temperatures that Periglacial environments experience, the loose sediment on the Earth’s surface is blown away exposing more of the land underneath. This means that many areas are made up of silt and clay (loess) e.g. Mississippi due to the movement of sediment.

A landform that the nivation process creates is that of nivation hollows. This sees the topography of the land altered in such a way that the summit of the hill or slope is levelled out but the sides of the hill are made up of a number of ledges leading to the summit.

In conclusion, there are many landforms that the Periglacial environments face. The environments are a subject to geomorphic alterations due to the number of processes that the landscape experiences. These processes alter the arid topography dramatically  and thus the peripheral zone to the glacier is constantly changing.