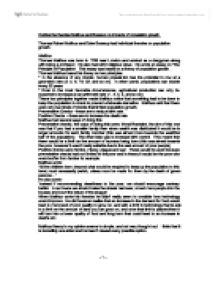 Outline the theories Malthus and Boserup on impacts of population growth.

Outline the theories Malthus and Boserup on impacts of population growth Thomas Robert Malthus and Ester Boserup had individual theories on population growth. Malthus Thomas Malthus was born in 1766 near London and worked as a clergyman along with being a professor. He also had strict religious views. He wrote an essay on 'The Principle of Population'. This essay was based on a theory of population growth. Thomas Malthus based his theory on two principles * In the absence of any checks, human population has the potential to row at a geometric rate (2, 4, 8, 16, 32, and so on). In other words, populations can double every 25 years * Even in the most favorable circumstances, agricultural production can only be expected to increase at an arithmetic rate (1, 2, 3, 4, and so on) These two principles together made Malthus notice that something had to be done to keep the population in check to prevent wholesale starvation. ...read more.

He did however realise that an increase in the demand for food would lead to more land of poor quality to grow on, and with a limit in technology that leads to a limit on the amount of land you can grow on, and once that limit is passed then it will turn into a lower quality of food and long term that could lead to an increase in deaths etc. Malthus theory in my opinion seems to simple, and not very thought out. I think that it is incredibly one sided and he hasn't viewed every possible option. Boserup Ester Boserup was born in Copenhagen in 1910. In 1966 she published a paper on how she thought population would increase. Boserup has produced a positive theory, contradicting some of Malthus' previous arguments. Although in some cases she agreed with Malthus she did not think one day that the world would run out of food. ...read more.

However Malthus had some very valid points (many not humanitarian), however seen as his theory was written almost 200 years before Boserups that may have seen suitable for his times. The fact that if you have fewer children your wealth will be distributed in larger amounts is valid and may have been taken into consideration by many families in 1800's. However I do not agree with the thought of not recommending cleanliness to the poor and encouraging bad habits. From a social side this is incredibly wrong in today's society however this may not have been the case in 1800's. However from another side, the Malthusian theory may be a little strong and slightly heartless, but I am able to see where he is coming from, and he has valid points which some have been used. E.g. Birth Rate: with the use of contraception. In a nutshell Malthus' theory is that the only way to solve the problem of the worlds population is to exonerate some of the population, while Boserups was that technology would improve so we would be able to cope with it! - 1 - ...read more.

A very factual overview of Malthus' and Boserup's theories of population growth. Some evaluation is given though this could have been strengthened through use of case studies to demonstrate possible evidence for these ideas in current times.
4 stars