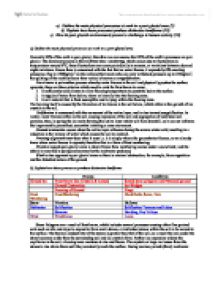 a) Outline the main physical processes at work in a peri-glacial area (5) b) Explain how these processes produce distinctive landforms (10) c) How do peri-glacial environments present a challenge to human activity (10) a) Outline the main physical processes at work in a peri-glacial area Currently 20% of the earth is peri-glacial; therefore we can assume that 20% of the earth's processes are peri-glacial. The dominant process is that of freeze thaw weathering, which occurs due to fluctuations in temperatures around 0�C, these fluctuations can occur periodically in seasons, or variations between day and night variations. Freeze thaw is concerned with the fact that as water freezes, it expands by 9% exerting pressures of up to 2100kg/cm3 on the rock and that most rocks can only withstand pressures up to 210kg/cm3, the splitting of the rock by freeze thaw action is known as congelifraction. Frost heave is yet another process whereby water freezes in the soil and physically pushes the surface upwards; there are three criterion which need to exist for frost heave to occur, 1. A sufficiently cold climate to allow freezing temperatures to penetrate below the surface 2. A supply of water from below, above or laterally into the freezing zone. ...read more.

The surface of the pingo may rupture as the ice core melts leaving a circular hollow filled with water. Nivation Hollow is where a patch of snow collects in a hollow and freeze thaw takes place around the edge and beneath the snow, causing the rock to disintegrate, when the snow melts during the thaw period, the weathered material is washed out by meltwater; over many cycles of this happening a nivation will form. The effectiveness depends on the type of rock, the frequency of the freeze thaw cycle, thickness of snow and the removal of the weather debris. Solifluction terraces are as a result of solifluction, whereby the melting of the ice in the active layer releases large volumes of water which is unable to drain away in the flat areas because of the impermability of the permafrost. The saturation of the active later gives rise to a variety of landforms. The wet active layer can start to move in the same way as a mudflow. Under periglacial conditions such movements will produce solifluction terraces which are step like features rising up to 15m high with treads of up to 500m long. A solifluction lobe is an elongated version of the above. Blockfields, Scree and Tors all originate as a result of frost shattering. ...read more.

to a depth of 200m in the Huang He basin; following the removal of the subsequent vegetation and over cultivation the area is victim to severe soil erosion and desertification, as the unconsolidated material has been washed away by the heavy summer monsoon rains at the rate of 1cm per year. The Central Government has encouraged and supported programmes such as irrigation projects, the planting of trees as a shelter-forest network against the shifting sand, which aimed to control and stabilized drifting sand in northen Shaanxi. By the late 1990s, over 50% of the eroded land has been converted back into farmland, and the shelter-forest network was stabilizing the sand, reducing sandstorms and protecting crops. We can see that peri-glacial areas do create challenges for human inhabitants, whether these are agricultural challenges, habitation challenges or challenges regarding resources; man can still limit the challenge by using appropriate technology such as engineered stilts in Alaska or projects such as those in Northen China. F.A.O Liz A-Level Geography Results-AQA B-MOHEEN KHAN AS GGB1 The Dynamics of Change 106/120 AS GGB2 The physical Option-Glaciation 90/90 AS GGB3 The Human Options 72/90 A2 GGB4 Global Change 70/90 A2 GGB5 Synoptic Module 75/120 A2 GGB6 Practical Paper 54/90 As you can see the theory I'm OK in, however it's the synoptic ideas I find difficult to get to grips with. ...read more.