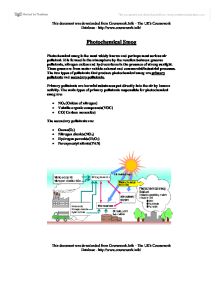 Photochemical smog is the most widely known and perhaps most serious air pollutant. It is formed in the atmosphere by the reaction between gaseous pollutants, nitrogen oxides and hydrocarbons

Photochemical Smog Photochemical smog is the most widely known and perhaps most serious air pollutant. It is formed in the atmosphere by the reaction between gaseous pollutants, nitrogen oxides and hydrocarbons in the presence of strong sunlight. These gases are from motor vehicle exhaust and commercial/industrial processes. The two types of pollutants that produce photochemical smog are primary pollutants and secondary pollutants. Primary pollutants are harmful substances put directly into the air by human activity. The main types of primary pollutants responsible for photochemical smog are: * NOx (Oxides of nitrogen) * Volatile organic compounds(VOC) * CO( Carbon monoxide) The secondary pollutants are: * Ozone(O3) * Nitrogen dioxide(NO2) * Hydrogen peroxide(H2O2) * Peroxyacetyl nitrate(PAN) These are the equations in the formation of photochemical smog:[2] NO2 (in presence if sunlight) ? NO + O. O + O2 ? O3 O3 + hydrocarbons ? aldehydes Hydrocarbons + O2 + NO2 ? lachrymatory substances (like PAN) Pollution form a coal power station Coal-fired power stations are major sources of pollution. The extensive use of coal is because there is a lot of it around. ...read more.

Topography is another important factor influencing how severe a smog event can become. [1] Formation of OZONE Ozone is present in the air that surrounds us. It is formed when hydrocarbons and nitrogen oxides (NOx) from forests, industries, and automobile exhaust react with heat and sunlight. This tropospheric ozone is often called "bad" ozone because it damages living tissue. Some tropospheric ozone is natural. Lightning and static discharges are one natural source of tropospheric ozone. Some ozone is also produced when natural hydrocarbons formed by trees and other vegetation react with nitrogen oxides in the atmosphere and sunlight. O2+O ? O3 Ozone reacts with NO to form NO2 O3+NO ? O2+ NO2 Processes to control SO2 and NOx A power station manager should make some important decisions which are concerned with minimising the effects of the waste, from the power station, on the environment. This is known as Best Practical Environmental Option(BPEO). The BPEO may vary in different power stations. The sulphur dioxide emissions from the power station can be removed by reacting it in the power stations flue gas with limestone, eventually forming calcium sulphate (CaSO4). ...read more.

This method is adapted mostly because it delivers low cost power and causes minimum spoiling of the environment. Research on photochemical smog formation Research work is taking place on several fronts to discover the chemistry of the formation of photochemical smog 1. Monitoring of tropospheric pollutants An important step is to know which pollutants are present in the atmosphere. Several monitoring stations which record pollutant concentrations are now plenty in the country. 2. Studying individual reactions in the laboratory To make predictions about pollutions, chemists need to know what reactions can take place and how quickly they occur. They have to measure the rate at which each reaction takes place under a variety of conditions from which they can predict how the rate of a reaction will proceed for different conditions 3. Modelling studies The information on rate of reactions is used in computer simulation to reproduce and predict the behaviour of pollutants in a photochemical episode. Accurate information is required for close simulation if the observed behaviour. 4. Smog chamber simulations These are laboratory experiments in which primary pollutants are mixed in a huge plastic smog chamber and exposed to sunlight under carefully controlled conditions. The concentration of various species is monitored as the photochemical smog builds up. ...read more.