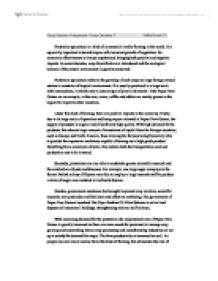 Geog Summer Assignment- Essay Question 3 Stella Kwok (7) Plantation agriculture is a kind of commercial arable farming in the world. It is especially important in humid tropics with luxuriant growth of vegetation. Its economic effectiveness is always emphasized, bringing both positive and negative impacts. In recent decades, crop diversification is introduced and the ecological balance of the natural environment is greatly conserved. Plantation agriculture refers to the growing of cash crops on large foreign owned estates in countries of tropical environment. It is usually practiced in a large scale with monoculture, in which only a certain type of plant is dominant. Take Papua New Guinea as an example, in the area, cacao, coffee and rubber are mainly grown in the region for export to other countries. Under this kind of farming, there are positive impacts to the economy. Firstly, due to its large scale of operation and being export-oriented in Papua New Guinea, the supply of products is regular and of uniformly high quality. ...read more.

The farm productivity is increased as well. As people can earn more income from this kind of farming, this stimulates the rate of urbanization, hence the development of infrastructure and improvement of public facilities, such as roads, railways, ports, towns, schools, hospitals and the supply of electricity and water. As a result, the living standard of the labour is greatly improved. Despite the economic benefits, plantation farming somehow brings negative impacts to Papua New Guinea. First is the reliance upon the protected markets in Australia. At present, about one-third of the copra, 40 percent of the coffee, most of the cocoa and rubber is exported to Australia, which is assigned to admit duty free. In return, Papua New Guinea has to pay taxes for any imports. This leads to outflow of capital to foreign countries because this kind of farming is highly export-oriented. Second is the problem of labour. Plantations require large amount of cheap labour, but the wage rate is progressively higher because of the rising living standard and commercialization of the country. ...read more.

This in turn reduces the use of pesticides. Hence, the chance of stream pollution is smaller, the sea organisms will not be poisoned or suffocated so easily, the nutrient flow can be more stable. There will be greater diversity of species of biomass, so the ecosystem will be more stable. Furthermore, diversification of crops increases the vegetation cover. There will be less surface runoff and soil erosion, yet infiltration increases. The nutrients of the soil can be preserved. Crop diversification also reduces the exhaustion of certain type of nutrients, fertility can be maintained and thus the use of fertilizer will be less common as well. Climatically, because of less crop failures, the amount of biomass increases. The evapotranspiration rate and wind speed can be more stable, so the microclimate can be maintained constant, the risk of global warming will not be getting serious so fast. In conclusion, plantation of cash crops is significant in Papua New Guinea for economic development. Though crop diversification may not be as profitable as plantation agriculture, ecological environment should not be ignored. In long-term, diversification of crops is a good way to safeguard the natural environment and brings more stable income to the farmers as well. ...read more.