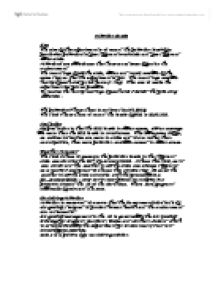 Pollution Levels Aim The aim of this experiment is to record the pollution level of a particular pollutant in five different rural sites and five different urban sites. Pollutants are substances that have an adverse effect on the environment. The recordings of all the sites, urban and rural, must be of the same day, so that the experiment is fair. The recordings must be hourly of each site for 24 hours (1 day). This was to make the experiment as fair as possible. To receive the hourly readings of each site I visited the following web-sites: - The pollutant I have chose is sodium dioxide (SO2). The date I have chose to record the levels of SO2 is 20/01/03. Prediction My prediction is that the SO2 levels in urban areas, will on average be more than the SO2 levels in rural areas. This is because traffic, as well as industries are more in cities and towns rather than countryside's, thus more pollution would be caused in urban areas. Weather Forecast The date I chose to measure the pollution levels in the different sites was Monday the 20th of January 2003. I chose this date, as it was winter and the weather in all the sites was always different, as a result, I was forced to choose this winters day. ...read more.

Coal burning is the single largest man-made source of SO2 accounting for about 50% of annual global emissions, with air burning account for a further 25 - 30% Carbon Monoxide (CO) 1. CO is a colorless, odorless, tasteless gas that is slightly lighter than air. 2. CO is an intermediate product through which all carbon species must pass when combusted in oxygen (O2). In the presence of a sufficient supply of O2 most CO produced during combustion is oxidised to carbon dioxide (CO2). However, this is not the case in spark ignition engines, especially under idling and deceleration conditions. Thus, the major source of atmospheric CO is the spark ignition combustion engine. Smaller contributions come from processes including the combustion of organic matter, for example in power station and waste incineration. Ozone O3 1. O3 is the tri-atomic form of molecular oxygen, it is a strong oxidising agent, and hence highly reactive. 2. Most O3 is formed indirectly by the action of sunlight and Nitrogen dioxide. Particulate Matter 1. Particulate matter is emitted from a wide range of sources, the most significant primary sources being road transport (20%), homes (20%), construction, mining, and quarrying (13%), industrial combustion plants and processes (10%) ...read more.