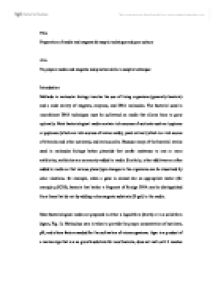 Title Preparation of media and reagents & aseptic technique and pure culture Aim To prepare media and reagents and practice skills in aseptic technique Introduction Methods in molecular biology involve the use of living organisms (generally bacteria) and a wide variety of reagents, enzymes, and DNA molecules. The bacterial used in recombinant DNA techniques must be cultivated on media that allows them to grow optimally. Most bacteriological media contain rich sources of nutrients such as tryptones or peptones (which are rich sources of amino acids), yeast extract (which is a rich source of vitamins and other nutrients), and various salts. Because many of the bacterial strains used in molecules biology harbor plasmids that confer resistance to one or more antibiotics, antibiotics are commonly added to media. Similarly, other additives are often added to media so that various phenotypic changes in the organisms can be visualized by color reactions. for example, when a gene is cloned into an appropriate vector (for example pUC18), bacteria that harbor a fragment of foreign DNA can be distinguished from those that do not by adding a chromogenic substrate (X-gal) to the media. Most bacteriological media are prepared in either a liquid form (broth) or in a solid form (agars, Fig. 1). Meticulous care is taken to provide the proper concentration of nutrients, pH, and others factors needed for the cultivation of microorganisms. Agar is a product of a marine alga that is a no growth substrate for most bacteria, does not melt until it reaches 100 �C, and one molten, does not solidify until about 44 �C. Agar plates allow the formation of isolated colonies of bacteria, while liquid media allow the growth of large amounts of cells for procedures such as DNA isolations. ...read more.

Also the use of micropipettor with tips from different manufacturer will also influence the dilutions. In addition, instrumental error of micropipettor also can result in � 0.1 �l deviations from intended, thus affecting the dilution process. 7. Why are different pipettes used between dilutions? Different pipettes used between dilutions are to prevent contamination with excess bacteria with each time diluting the media. 8. Observe the plates that you spread with the diluted E. coli culture. If you prepared the dilutions correctly, you should have roughly tenfold colony on each plate as you go to the higher dilutions. Is this case with your plates? If not, suggests an explanation. The colonies of bacteria in the cultures media do not reduce by 10 times with each 10 times dilution. This is because some error was occurred during the serial dilution. For instance, bacteria are not evenly dispersed during dilution. Beside that, different pressure applied on micropipettors during sucking of media containing bacteria also can result in different amount of bacteria introduced into the nest dilutions test tube. 9. How can you be certain that you have a pure culture on an agar plate? The certain that we have a pure culture on an agar plate, the appearance of the surface of medium are observed. In this case, E. coli cause will cause turbidity on its colonies with milky white color. Different appearance often denotes the presence of other microorganism. Therefore, we expect a pure culture to have a standard, same color (milky white) and sounded shape, randomly dispersed colonies of E. coli. Conclusion There are 1.83 X 1012 colonies per original sample and there are also many pre caution step that we have to take care during the medium/reagent preparation and also for the aseptic technique. ...read more.