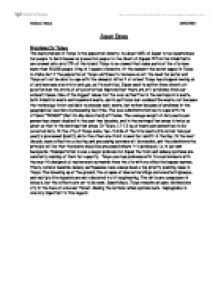 Japan Essay Problems In Tokyo The main problem in Tokyo is the population density. As about 83% of Japan is too mountainous for people to build houses or places for people to live. Most of Japans 127 million inhabitants are crowed onto only 17% of the island. Tokyo is so crowed that some parts of the city have more than 20,000 people living in 1 square kilometre. At the moment the water supply in Tokyo is stable but if the population of Tokyo continues to increase so will the need for water and Tokyo will not be able to cope with the demand. After 2 oil crises' Tokyo has stopped reeling on oil and now uses electricity and gas, as it's main fuel. Japan used to suffer from chronic air pollution now the state of air pollution has improved but there are still problems from car exhaust fumes. One of the biggest issues for the local authorities in the metropolis is waste, both industrial waste and household waste, and in particular non-combustible waste, not because the technology is not available to process such waste, but rather because of problems in the geographical location of processing facilities. ...read more.

The site must have access to an international airport or there must be plans to build one within 10 years. The site must have enough land for 600,000 people this land should also be flat and not too high. There should be no risk from natural disasters. The site should also have access to enough water for 600,000 people. Miyagi District: Miyagi district is situated on the coast near the Pacific Ocean. There is no known airport but plenty of land to build one and more buildings. There is a lot of flat land but there are some volcanoes and mountain ranges in the area. The area is centrally situated in the Tohoku area. Tochigi: Tochigi is located in the north of the kanto region. The land is mainly flat but there is a mountain range. I don't think it's far from other cities. Ibaraki District: Ibaraki is located in the northern Kanto area, which lies in about the center of the Japanese Islands. On the East is the Pacific Ocean with a coastline of 180 km the northern part borders Fukushima Prefecture. On the west is Tochigi Prefecture and on the south are Chiba and Saitama Prefectures, separated by the Tone River, which covers the most area in Japan. ...read more.

But this would only benefit the people of Tokyo in the short term, as eventually Tokyo will not be able to cope with the amount of people living there. And once the new city is built the pressure would decrease of Tokyo as many people would move to the new city and it will be better having 2 cities at an average population than 1 city struggling to cope with the amount of people living there. There were lots of pros and cons for all the other cities and the 2nd best site would be Gifu as there is no danger of natural disasters it is centrally located and near to Tokyo and an international airport. But the south part was more marsh land so that could only ever of been residential development as skyscrapers would sink. The north section of Gifu was hilly and a lot higher than the south. The hilliness of the north would also affect the building of skyscrapers. And even if the south had not been marshland and you could build skyscrapers there, there would have been too much of an altitude difference between the north and the south. Overall the best site was the Ibaraki District as it had everything needed for a major city. Michael Binns 26/04/2007 ...read more.

Overall, this is an interesting piece of work, examining the potential to move the capital city in Japan. This essay attempts to evaluate different areas in Japan for their potential to house a new capital city. This essay would benefit from greater depth in the evaluation and requires some references for the facts that are given.
4 stars