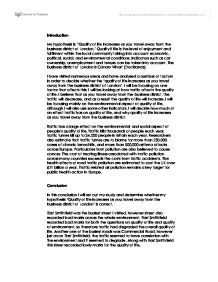 My hypothesis is: ‘Quality of life increases as you travel away from the business district of London.’ Quality if life is the level of enjoyment and fulfilment within the local community taking into account economic, political, social, and environmental conditions. Indicators such as car ownership, unemployment and tenure can be taken into account. The business district of London is Canary Wharf (Docklands).

Traffic has a large effect on the environmental and social aspect of people’s quality of life. Traffic kills thousands of people each year, traffic fumes kill up to 34,000 people in Britain each year. Researchers also estimate that traffic fumes are to blame for more than 250,000 cases of chronic bronchitis, and more than 500,000 asthma attacks across Europe. Particulates from pollution are also believed to cause cancer. The cost of treating illness associated with traffic pollution across many countries exceeds the costs from traffic accidents. The health effects of road traffic pollution are estimated to cost the UK over £11 billion a year. Traffic-related air pollution remains a key target for public health action in Europe.

In this conclusion I will set out my study and determine whether my hypothesis ‘Quality of life increases as you travel away from the business district of London’ is correct.

The least busy road I visited was Patriot Square however in this case the environment survey seemed to record top marks for the street.  On my quality of life survey all questions were answered positively, further proving the fact that traffic has major effects on the quality of life.

So as a result my hypothesis: ‘Quality of life increases as you travel away from the business district of London’ is in my opinion correct. Traffic is a factor in this. Traffic affects quality of environment very much, and as a result degrades the quality of life. Traffic has much significance on the environment as traffic can be blamed for causing air and noise pollution. As you travel away from the business district, the amount of traffic decreases. Simultaneously, the quality of life increases, proving that there are links within.

However, I believe that there are also other factors leading to the quality of life increasing as you travel away from business district. There may be a cycle of urban deprivation. First of all, there could be a decline in manufacturing due to deindustrialisation. This may lead to industries, and also the most wealthy and mobile people, to move out of the inner areas of the city. There may as a result be much obsolescence of environment and property. The poorest sectors of the society may be left behind which causes social problems. This results in a lack of investment by local authorities, and results in a spiral of decline.

On the other hand, I believe that quality of life could also decrease as you travel away from the business district, due to the flagship development of the area (Docklands). As a result, new industries and business then relocate to the area, leading to the cycle stopping and the quality of life increasing.

I will now describe the reasons that may have influenced the outcome of my results on the day I conducted the environmental surveys, quality of life surveys, and traffic surveys on four roads in London.

First of all I visited all of the roads at different times, so as a result some roads may have had more traffic going through it at a particular time. Therefore affecting the amount of traffic shown on the traffic survey and also the environmental survey, as the road would have looked busier and as a result uglier, resulting to lower environmental marks for the roads and also lower marks by pedestrians. Also, some roads may be less crowded at a particular time and therefore resulting in better traffic and environmental surveys.

Also pedestrians may just have answered without paying attention as they may have been in a hurry and rushed answers, or they may not have taken the surveys seriously and just guessed their answers. Both these results would have been void as it is not a reflection of their own personal opinion. They may have lead to unrepresentative results.

Also at the particular times of the day it had been raining, this in turn may have resulted in more negative environmental surveys and questionnaires than on other roads because the rain would have made the environment look much uglier, and in turn produce more negative  results for the road.

For the environmental survey I was reliant on just one persons view and each person has different points of view, each view is subjective which in turn may have given more positive or negative results. The results would not be identical to everyone in their position.

For my traffic survey I only had enough time to count each roads traffic for five minutes each, which I would multiply by twelve in order to receive an average traffic count for one hour, however this process in inaccurate as traffic is not equivalent every five minutes and in fact there are different amounts of traffic every five minutes. It is only an estimate.

On the busier roads such as East Smithfield, the pedestrians would mostly be workers as there are many office blocks around the area, so they may have wanted to get the questionnaire over with to get to work. Also they could have been stressed and tired due to work, and given negative results. On the less busy streets such as Patriot Square, people were more likely to be residents thus resulting in positive results.