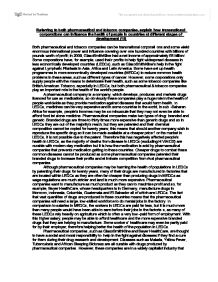 Referring to both pharmaceutical and tobacco companies, explain how transnational corporations can influence the health of people in countries at different stages of development.

Referring to both pharmaceutical and tobacco companies, explain how transnational corporations can influence the health of people in countries at different stages of development (15) Both pharmaceutical and tobacco companies can be transnational corporations and some wield enormous international power and influence covering over one hundred countries with billions of pounds worth of profit; in 2009, GlaxoSmithKline had a net income of approximately �6 billion! Some corporations have, for example, used their profits to help fight widespread diseases in less economically developed countries (LEDCs), such as GlaxoSmithKline's help in the fight against Lymphatic Filariasis in Asia, Africa and Latin America. Some have set up health programmes in more economically developed countries (MEDCs) to reduce common health problems in these areas, such as different types of cancer. However, some corporations only supply people with the means to deteriorate their health, such as some tobacco companies like British American Tobacco, especially in LEDCs, but both pharmaceutical & tobacco companies play an important role in the health of the world's people. A pharmaceutical company is a company, which develops, produces and markets drugs licenced for use as medications, so obviously these companies play a huge role in the health of people worldwide as they provide medication against diseases that would harm health. ...read more.

Tobacco companies feel much less of an obligation to help eradicate disease than pharmaceutical companies do and for that reason few tobacco companies have invested, at the expense of their profit, in health schemes to aid the disease-stricken in LEDCs. They are much more interested in securing a long-term community of consumers demanding their product. British American Tobacco (BAT) in Africa is a prime example of this capitalist, profit-driven attitude in LEDCs. In Malawi, BAT advocated the sale of single cigarette sticks, which were very popular with children as they were so cheap; a single cigarette costs one fifth of the price of a single biscuit, which at least has some nutritional value. BAT used a "single-stick" campaign to try and encourage as many young people as possible to start smoking as they knew that once they had tried a few they would eventually become addicted to their product, which is wondrous news for their profit, as their body tells them that they 'need' a cigarette and so they buy more of their product and for this reason, 80 000 to 100 000 children start smoking worldwide every day. ...read more.

Due to MEDCs' laws, tobacco companies must provide some level of healthcare and so in that instance they help better the health of their employees, but again they do little to help with international health problems as they are more concerned with their profit. In conclusion, both tobacco and pharmaceutical companies have great influence on the health of people in countries at different stages of development, whether they be an MEDC or an LEDC. Producing drugs and medicines and health aid provided by pharmaceutical companies are probably the largest positive influences either of these types of companies have on the health of populations. Pharmaceutical companies are generally positively influencing the health of people in countries at different stages of development, but in different ways either by providing aid or employment or through the capitalist nature of the industry they are in. Whereas tobacco companies are trying to maintain a large consumer pool for their product, whilst adversely affecting people's health due to the carcinogenic nature of tobacco and cigarette products and are therefore negatively influencing the health of people in almost exactly the same way in countries of all stages of development. As tobacco companies have less social and moral responsibility they are not motivated to help in the fight against widespread diseases, like the pharmaceutical companies are. ...read more.

An outstanding analysis and evaluation of the role of tobacco and pharmaceutical TNCs in countries at different levels of development. The only thing that would improve this is referencing the information used.
5 Stars