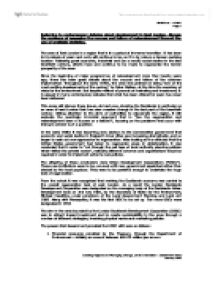 Referring to contemporary debates about development in East London, discuss the problems of assessing the success and failure of redevelopment through the use of available statistics.

Referring to contemporary debates about development in East London, discuss the problems of assessing the success and failure of redevelopment through the use of available statistics. The area of East London is a region that is in a period of immense transition. It has been for hundreds of years and surly will continue to be, as it is by nature a forever evolving location. Following great economic, industrial and (as a result) social decline in the late twentieth century, efforts have and continue to be made to regenerate the former prosperity of the area. Since the beginning of major programmes of redevelopment more than twenty years ago, there has been great debate about the success and failure of the schemes implemented. Throughout the early 1970s, the area was praised as being "one of the most exciting developments of the century" by Peter Walker, at the time the secretary of state for the environment. But despite millions of pounds of marketing and investment, it is argued in many contemporary debates that what has been offered for years has never been delivered. This essay will discuss these issues, old and new, studying the Docklands in particular as an area of east London that has seen massive change in the last part of the twentieth century. Giving attention to the aims of authorities to rejuvenate the region, it will evaluate the seemingly immortal argument that is "has the regeneration and redevelopment been a success or a failure?", focusing on the problems that occur with trying to answer such a question. ...read more.

The surrounding environment was also better improved as the old industrial areas were redeveloped, so many of the units could be built in close vicinity to, or even on, the waterfront. Away from housing and accommodation, more than 2.25 million square metres of non-residential floor space (that is new industrial zones, commercial and leisure buildings) have been created by the LDDC. Although some of this does include a few light industrial developments, it is principally recreation complexes, shops and other retail establishments. In addition, the creation of almost 67,000 new jobs in the docklands represents a massive achievement and one seemingly of considerable merit. At this rate, it has been forecast that the working population of the region is likely to be 175,000 by the year 2014. When the commercial and economic heart began to slow into non-existence just twenty years ago, the population could only foresee devastating levels of redundancy. Indeed, between 1965 and 1985, it is estimated that upward of 27,000 jobs were lost in the docklands region. This is an incredible turnaround from the future the region faced in the latter part of the twentieth century. In relative terms, it can be said that this information is excellent news and that it is good evidence to suggest that the redevelopment of the London Docklands has been a success. Unfortunately, it is only one side of the coin and there are many other factors that contribute to the contemporary "success or failure" debate. ...read more.

Having referred to several contemporary debates about development in east London, it is clear that there are problems in assessing the success and failure of redevelopment in the region. The disputes that impede this evaluation include one or two trying questions; if an authority is to spend a lot as much money, as the LDDC has, who should benefit? The local people should surely be top of the list? If an authority are supposed to provide for the 'local' people then they have to know who the local people are - how do you define 'local'? How long does one have to live in an area to be considered local?! Inter-urban differences further the argument as to who should benefit from such colossal spending. As the LDDC has a strict, defined border, areas that it can develop are frequently right next door to those that are much older and more run-down, making contrasts obvious. Having studied these arguments, it is without a doubt extremely difficult to come to a standard, straightforward conclusion as to the success or the failure of regeneration in east London. The debates that arise over the actual need and appropriateness of some of the changes in the region that the LDDC once surveyed are still very much open, despite evidence to suggest great achievement in some sectors. Indeed, there are concerns about the paths that were followed in the hope of regeneration. The LDDC has now been disposed of, but issues may still be raised as to its equity and democratic responsibility. ...read more.