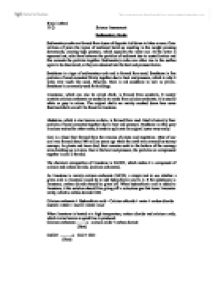 Sedimentary Rocks Sedimentary rocks are formed from layers of deposits laid down in lakes or seas. Over millions of years the layers of sediment build up resulting in the weight pressing downwards, creating high pressure, which squeezes the water out. As the water is squeezed out, salts form between the particles of sediment due to crystallization and this cements the particles together. Sedimentary rocks can either rise to the surface again to be discovered, or they can descend into the heat and pressure below. Sandstone is a type of sedimentary rock and is formed from sand. Sandstone is fine particles of sand cemented firmly together due to heat and pressure, which is why it looks very much like sand. However, there is red sandstone as well as yellow. Sandstone is commonly used for buildings. Limestone, which can also be called chalk, is formed from seashells. It mostly contains calcium carbonate as seashells are made from calcium carbonate. ...read more.

Calcium carbonate calcium oxide + carbon dioxide (Heat) CaCO3 CaO + CO2 (Heat) Calcium oxide, or quicklime reacts violently with water to produce calcium hydroxide, which is also known as slaked lime. Slaked lime is a white powder and a very strong alkali, and because it is an alkali it can be used in agriculture to reduce the acidity soil, which is too acidic to healthy growth of crops. The advantage that slaked lime has over quicklime is that it is much faster at reducing acidity of the fields. Calcium oxide (quicklime) + water = calcium hydroxide CaO + H2O Ca (OH) 2 Limestone can be used for making building, however acid rain can corrode the building made from limestone. Limestone can be heated with clay to make cement. When limestone is heated with sand and sodium carbonate, it makes glass. Any rocks, which are not eroded away, are eventually returned to the mantle when plates descend in tectonic activity. ...read more.

Fossils are likely to be unclear or destroyed completely by the heat and pressure involved in the formation of metamorphic rocks. There are several features in sedimentary rocks, which help scientists to work out what has happened to the rocks over the years and the origin of the rocks. Such features include: * The order of the layers, as the deeper the layer is, the older the rock is. * Discontinuous deposition, where layers of different rocks are laid down at different times. * A younger layer of rock could cut across an older one. * Ripple marks in the rock can show that it has been formed from the seabed due to waves or currents. * When rock formations are tilted, it causes large-scale movements and the angles can be followed over distances to show the relationship between distant rock formations. * The folding of rocks shows the compression of layers due to plate movement. * When fractures or fault signs are present in rocks, it shows evidence of earthquakes in the past. ?? ?? ?? ?? Kinjal Juthani 11 Q Science Assessment ...read more.