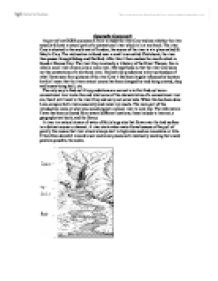 Study the river Cray and see whether the river actually follows a natural path of a conventional river which is in a text book.

Geography Coursework As part of my GCSE coursework I aim to study the river Cray and see whether the river actually follows a natural path of a conventional river which is in a text book. The river Cray is situated in the south east of London, the source of the river is at a place called St. Mary's Cray. The mid-section is found near a small town called Chislehurst; the river then passes through Sidcup and Dartford. After this it then reaches the mouth which is found at Barnes Cray. The river Cray is actually a tributary of the River Thames; this is when a small river stream joins a main river. My hypothesis is that the river Cray does not the conventions of a text book river. I believe my predictions to be true because of what I have seen from pictures of the river Cray it has been largely influence by humans by this I mean that the rivers natural course has been changed by road being created, shop and houses being built, etc. The only way to find out if my predictions are correct is to first find out how a conventional river looks like and what some of the characteristics of a conventional river are, then I will travel to the river Cray and carry out some tests. When this has been done I can compare both rivers accurately and make my results. The main part of this introduction looks at what you would expect a natural river to look like. The information I have has been collected from several different locations, these include to internet, a geography text book, and the library. A river is a natural stream of water of fairly large size that flows over the land surface in a distinct course or channel. A river starts when water flows because of the pull of gravity this means that river almost always start in high areas such as mountains or hills. ...read more.

3. Large boulders and stones in the middle of a river. 4. Tree branches and trees in the river. 5. Pollution like cans, bottles, crisp wrappers and other rubbish All of the processes above occur at different points along the river to a certain degree. The combination of these processes causes the particular features of a river which I have talked about. At the mouth you get lots of erosion because the water is fast moving and the land is steep. Steep land makes the river flow faster. Fast flowing water has lots of energy this energy is used up by breaking big bits of river bed and bank off here the load carried by the river tends to be large and very angular. As you reach the mid-section the processes change and you get a lot of transportation occurring. The gradient gets less steep and the river speed therefore the speed decreases. This causes a drop in energy levels. As the river has less energy it carries less heavy objects. This means the river load tends to get smaller. As these particles are carried along the process of attrition gets to work making the pebbles more rounded. This occurs because the knocking of rock fragments in the water against one another means that the fragments are broken into smaller pieces and become smoother. The river in the mid-section is joined by smaller tributaries which does make the width of the river larger as well as the depth. As a river winds its way from its source to its mouth A number of processes of erosion take place like corrosion this is the wearing away of the river channel by water. As you move to the mouth of the river the gradient is almost flat. This means the energy levels have completely dropped making the river process mainly depositional. The river speed is very slow and the pebbles carried become less rounded because the speed of the water becomes less fast so attrition cannot work as well as at the start of the river. ...read more.

river is less deep and less wide but as we get to the mouth it get deeper and wider, But not by much. In a text book river the source is usually only a tiny stream and the mouth has a large width and is very deep. I believe that the river Cray differs slightly from the one in a text book because many reasons. Human intervention is one cause. This is because human have put up walls against the bank of the river so it cannot flow naturally and grow as a normal river would. Another reason why the river Cray is different from text Book Rivers is because it is only a tributary and tributaries tend to be smaller that rivers. I think I have achieved my aim in comparing the river Cray to a common text book river. The results here can be misleading though. Since we only completed results in three locations, which is a small fraction of the rivers length, this means that my conclusion can only be very limited. What these results do not show is that the speed of the river is directly influenced by humans. At the source of the river the flow goes under a road through human construction pipes. This controls the flow of water, also at the mid section there is a weir that also controls flow of water. There were many limitations to my project though, the study sites were all within the same drainage basin the different sites were only visited once, on one day, and in one season the equipment used to take the measurements was very basic and did not enable us to gain precise results and there were many more like that the different people recorded different results. The list goes on. I think that we could have used better equipment, took reading from more that 3 locations and let one person take all the readings (which would make it more fair) to make this project more successful. ...read more.