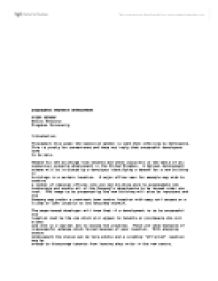 SUCCESSFUL PROPERTY DEVELOPMENT NIGEL DUBBEN Senior Lecturer Kingston University Introduction Throughout this paper the masculine gender is used when referring to developers. This is purely for convenience and does not imply that successful developers have to be male. Demand for new buildings from tenants and owner occupiers is the basis of all commercial property development in the United Kingdom. A typical development scheme will be initiated by a developer identifying a demand for a new building or buildings in a certain location. A major office user for example may wish to combine a number of regional offices into one new building able to accommodate new technology and enable all of the Company's departments to be housed under one roof. The image to be presented by the new building will also be important and the Company may prefer a prominent town centre location with easy rail access or a fringe of town location on the motorway network. The experienced developer will know that if a development is to be successful the location must be the one which will appeal to tenants or purchasers who will either pay rent or a capital sum to occupy the property. There are many examples of unsuccessful schemes which failed because of poor location. With shopping centre development the choice can be very subtle and a slightly 'off-pitch' location may be enough to discourage tenants from leasing shop units in the new centre. If a site for a new development is identified and the site (or redundant buildings) is available for purchase, planning consent for the scheme must be sought from the Local Authority. It is usually the case that the developer will have concentrated on those locations where the planners will support development proposals and planning consent is likely to be received. If the location is correct and planning consent is likely the developer must also arrange finance to buy the site, build the scheme and let (or sell) ...read more.

If he wishes to seek approval to the principle of development, he can make an outline application. This is sometimes referred to as a red line application, as a red line is drawn around the site plan supporting the application. If consent is granted, this will be subject to reserved matters and the developer will have to seek a subsequent consent for these detailed matters later. Alternatively a full application may be made which will include all detailed matters as well as the basic principles. The Local Authority will decide the application in the context of plans which will have been previously published and approved by the Secretary of State. Under the present two tier system of Local Government, the County Councils produce structure plans for their area which show in strategic terms the type and location of development which will be permitted during the period of the plan. The District Councils produce local plans which deal with detailed matters related to specific areas of land. If the planning application does not accord with the local plan, the Local Authority will be justified in refusing the application but obviously a developer would be unwise to make an application of this type. Structure plans have a life of between 5 and 15 years and comprise a lengthy written statement supported by explanatory diagrams. The important matters dealt with in the structure plan are strategic matters such as tourism and leisure, waste disposal, new housing, employment and transport. The Authority has a two month period in which to decide an application but it can ask the applicant for more time. If the application is refused the applicant can appeal to the Secretary of state and the matter in the majority of cases, will be decided by a Government Inspector. In major cases, the Inspector will make recommendations to the Secretary of State who will, after advice, take a decision. ...read more.

Kenneth Clarke stated that PFI is 'a radical and far reaching change in capital investment in public services which will break down further barriers between the public and private sectors'. The central argument in favour of PFI is that the private sector is more capable of promoting efficiency than government and will provide business solutions to public sector requirements. It is also argued that the risks of increased construction and running costs, which appears to be a feature of public sector schemes, will disappear with PFI where all the risks are borne by the private sector. Critics of PFI point out that it is extremely difficult to produce a performance specification for, say, a highly complex building such as a hospital and this will lead to private sector contractors being allowed to cut corners to the detriment of the public. It is also pointed out that the government can always borrow money more cheaply than the private sector and that this will inevitably lead to increased costs which will be passed on to the public. The change of government in May 1997 led to a thorough review of the experience gained from using PFI in the previous five years. Malcolm Bates was appointed to carry out a review which resulted in 29 recommendations aimed at rationalising and reinvigorating the PFI process. The 'Treasury Taskforce' was the government's response to the review and this body consisted mainly of city financiers who were charged with building up PFI expertise in government. The taskforce had a life of three years and is replaced by 'Partnerships UK' which will operate as a joint private/public consultancy to assist with the PFI process. There are currently hundreds of PFI schemes in the process of completion and the present government is wedded to this form of procurement for public sector projects. Among the leading PFI projects are the following: ? Northern Underground Lind ? Bridgend and Fazakerley prisons ? Scottish Air Traffic Centre ? Channel Tunnel rail link ? Docklands railway ? Post Office Counters automation. SUCCESSFUL PROPERTY DEVELOPMENT Nigel Dubben, Kingston University ...read more.