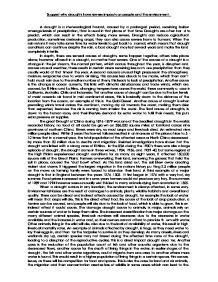 Suggest why droughts have severe impacts on people and the environment.

Suggest why droughts have severe impacts on people and the environment. A drought is a meteorological hazard, caused by a prolonged period, receiving below average levels of precipitation, than is usual in that place at that time. Droughts are often hard to predict, which can result in the effects being more severe. Droughts can reduce agricultural production, sometimes destroying crops; they can also cause severe harm to humans. When the rain returns it may take some time for water levels to get back to normal, which means that drought conditions can continue despite the rain, a bad drought may last several years and make the land completely infertile. In depth, there are several causes of droughts; some happen together, others take place alone; however all result in a drought, no matter how severe. One of the causes of a drought is a change in the jet stream, the normal pattern, which occurs throughout the year, is disrupted and causes unusual weather, these results in certain areas receiving less or more precipitation than they usually would at that time in the year. A second cause is unusual high pressures in the atmosphere; moisture evaporates due to warm air rising, this causes less clouds to be made, which then can't hold much rain due to the smaller number of them, this leads to lack of precipitation. Another cause is the change in ocean currents, this links with climatic disturbances and trade winds, which are caused, by El Nino and La Nino, changing temperatures across the world, these commonly occur in California, Australia, Chile and Indonesia. Yet another cause of drought can be due to the low levels of moist oceanic air found in mid-continental areas, this is basically down to the distance of the location from the ocean, an example of this is the Gobi Desert. Another cause of drought is when prevailing winds travel across the continent, moving dry air towards the coast, making them drier than expected, because the air is coming from interior the coast. ...read more.

Fires can spread in different ways, either across the tops of trees, from the debris on the floor, or when embers fall onto the ground, which then catch alight to other materials. When forests are burnt down it results in the loss of not only habitats and older, fully-grown trees, but also the direst loss of young trees. The ground after a fire is likely to be so dry that it is hard for any plants to survive, or for any new ones to grow and replace those burnt down. The degration of landscape quality, including increased soil erosion, may lead to more permanent loss of biological productivity of the effected areas. The lack of rain can cause the soil to harden, crack into lumps and eventually crumble into dry dust. Droughts can create wind blown dust bowls, which erodes the landscapes, ruining land and habitats also damaging remaining areas of water and with it, the aquatic wildlife within. Erosion decreases soil productivity due to the loss of plants nutrients, meaning plant roots can no longer hold the soil together, which leads to the degration in soil structure. A good example of this is Lake Naivasha in Kenya, which showed the major effects of drought. The social impacts of a drought mainly involve public safety, health, conflicts disaster and quality of life. One of the main groups of people affected by drought is the farmer, and as farmers suffer as does community. The severe lack of water kills plants, reducing crop production; issues linked with crop production can also be things such as insect infestations, which spread killing more and more crops, and also plant disease. The lower yields and poor crop quality, not only affects the farmer in the means of lower income, but also all of the people in which relied on the production of the crops to be fed. When there are troubles which producing good crops, farmers may have to look into spending more money on irrigation projects, to stretch out water so that it reaches their land. ...read more.

An additional result of drought on people is the increase in migration flows. This is usually rural to urban areas in a country, or simply one country to another, which causes refugee problems, an example of this is people travelling into America. Migrations after droughts are often stimulated by a greater availability of food and water elsewhere as most people believe that in the city, because it is richer than the rural areas which they came from everything will be available for them. Migration causes a problem as even when the drought is over, people don't return home either in case it happens again, or simply because they believe life in an urban area is better. The issue this conjures is that rural areas lack the valuable human resources needed for economic development; as such high amounts have migrated elsewhere. People migrating from a rural to urban area also creates problems for the urban areas as increasing amounts of pressure are placed on it to provide for the ever growing population, this can lead to grater poverty and social unrest levels. An example of such a situation is in Brazil, between the years 1950 - 1980, there was a total loss of 5.5 million people from the northern regions of Brazil, and drought was the reason many of the people migrated elsewhere. In conclusion it is clear that drought has a major effect on both the environment and people. For those living in an MEDC, I believe that drought would still be a major issue, however they would be able to overcome it much easier than those living in LEDC's. Additionally MEDC's invest in LEDC's, which means that it is not directly their country, which is affected. However for the people living in an LEDC, they rely mostly on their surroundings, growing their own crops, rearing livestock to feed people and generate an income for themselves. I believe that the environment and people are both effected in different ways, due to drought; some effects are more severe than others, although one main point is that people rely on the environment to survive. ...read more.