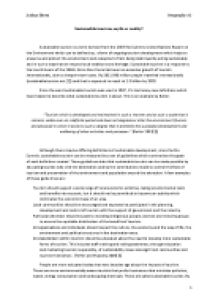 ﻿Joshua Sheen Geography A2 Sustainable tourism, myth or reality? Sustainable tourism is a term derived from the 1987 Rio Summit, United Nations Report on the Environment which can be defined as; a form of ongoing tourism development which helps to preserve and protect the environment and ecosystems from being destroyed by acting sustainably and in such a way that we respect local traditions and heritage. Sustainable tourism is a response to the tourist boom of the 1960s. Since then there has been an excessive growth of tourism internationally, due to cheaper travel costs. By 2011 980 million people travelled internationally (sustainabletourism.net [1]) and that is expected to reach to 1.5 billion by 2020. Since the word sustainable tourism was used in 1987, it?s had many new definitions which have helped to describe what sustainable tourism is about. This is an example by Butler. ?Tourism which is developed and maintained in such a manner and at such a scale that it remains viable over an indefinite period and does not degrade or alter the environment (human and physical) in which it exists to such a degree that it prohibits the successful development and wellbeing of other activities and processes.? (Butler 1993[2]) Although there may be differing definitions of sustainable development, since the Rio Summit, sustainable tourism can be measured by a set of guidelines which summarises the goals of each definition created. ...read more.

Ancient streets were removed for high ways, many night clubs and tourist villages have been erected along the coast. Due to the growing demands of tourism, money is being spent on promoting Ibiza rather than protecting the environment, repairing ancient monuments and protecting the coastline and the way of life which had changed so much since the 1960?s. Over half of the islands born population work in the tourist industry, which in 1960 it was only 0% (ecociencia.com[4]). Tourism on the island has affected not only caused cultural issues but urban and environmental issues which the local population blame on international tourists who are attracted to low cost hotels. The Spanish government is trying to encourage a more cultured and quieter tourism scene, by closing all nightclubs by 6 a.m. and requiring all new hotels to be of 5-star standards. In 2009 Spain received 52.5 million tourists although it only had a population of 45,989,016 inhabitants (deliveringdata.com[5]). The tourist boom on Ibiza is not a rare occurrence as this can also be seen throughout the world as tourists are attracted to more pristine looked after areas such as the Philippines or Jamaica. In Jamaica due to the increasing tourist demand new areas are being developed on the island that were forbidden from being built upon before, such as the Mystic Mountain, Ochos Rios to try to attract international tourists to the island. ...read more.

Tourist hotspots such as Ibiza which were created before the Rio Summit are hard to make sustainable due to rapid growth which has caused irreplaceable damage to the environment and local culture. Air pollution from tourist planes and destroyed sea coral are just a few examples of poor tourism sustainability; depending on the countries government, issues regarding tourism are more important than the environment leading to irreparable damage, this is evident in the Canary Islands. As a result two nature reserves are being proposed to protect areas in the Canaries and programs to educate tourists on being sustainable so local culture is not lost are suggested. In my opinion I think that sustainable tourism is far from being a myth but not that far from being reality. Since the Rio Summit, there has emerged a new type of tourist which is more eco-friendly, sustainable and conscious of how they should treat tourist areas. Business are becoming more aware that people want a more sustainable, quality and rememberable holiday which is forcing change in the tourist industry. Yet there is a lot of improvement that needs to be made for sustainable tourism to become reality. These changes that are being made are not being made due to becoming more sustainable but rather the opposite. The educations of tourists have made a profound effect on the world wide tourism business that they have to become more ecological and environmentally aware to attract tourists. ...read more.