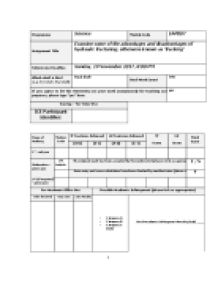 In addition to a tremendous reduction in carbon emissions, the overall carbon footprint of natural gas extraction is also becoming smaller. Furthermore, the lure of ?fracking? has enabled the prosperity of manufacturing, for more than $80 billion investments, abundant projects and incremental energy-related jobs (Dilallo, 2014). It appears many of the above advantages are exaggerated, so the disadvantages cannot be ignored. The first main disadvantages is that ?fracking? may lead to illness. Radioactive smoke, gas, methane, salty and polluted water are all released with the emission of natural gas. Subsequently, humans will have potential to become ill when exposed to the above stated contamination. Additionally, some critics pointed to the tap water was polluted by methane. To illustrate this, some of these critics suspected that the contamination was caused by enterpreneurial ?fracking?. In fact, later it was shown in study by scientists Osborn and his fellow that the water, which contain high level of dissolved methane are within 1 km of the ?fracking? area (Dilallo, 2014). Moreover, local residents who are anxious about their heath had already migrated from ?fracking? site, which unveiled endlessly hazardous unhealthy outcomes ?fracking? may cause. ...read more.

The old way to gain gas was that firstly bored a gas reservoir from the top, followed by installing a pipe into the opening as well as sealing all the segments of a pipe to the surface. However, trying to reach more supplies of unavailable shale gas, the new way is using horizontal drilling to bore through the rock, which may lead to the non-stop effusion of gas (Thompsom, 2012). Therefore, compared with the original method, the new one is more doubtful. To summarize more general, ?fracking? is a risky technology, otherwise it is still in the development. The debate of ?fracking? has been spreading worldwide, thus leading to a controversial topic whether it is appropriate. This essay has evaluated that ?fracking? is a two-sided technology, for stimulating finance and reducing carbon, which are the primary benefits of ?fracking?. Nevertheless, it also makes people sick, accelerates global warming, causes earthquakes and has its self-imperfection. Furthermore, to summarize more specifically, the negative parts of ?fracking? may account for the heavy proportion in comparison with the merely positive parts. Consequently, in the future, the viable blueprint of ?fracking? is that it will perhaps be prohibited. ...read more.