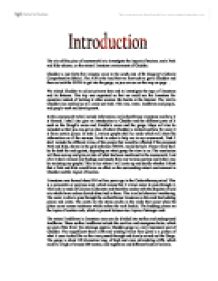 The aim of this piece of coursework is to investigate the impact of tourism, and a Park and Ride scheme, on the natural limestone environment of Cheddar.

The aim of this piece of coursework is to investigate the impact of tourism, and a Park and Ride scheme, on the natural limestone environment of Cheddar. Cheddar is just forty-five minutes away to the south east of St Gregory's Catholic Comprehensive School. The A18 is the road that we first took to get to Cheddar and then we took the B3135 to get into the gorge, as you can see on the map on page . We visited Cheddar to collect primary data and to investigate the type of limestone and its features. This trip was organised so that we could see the limestone for ourselves instead of looking at other sources like books or the Internet. The visit to Cheddar also enabled us to a cross unit task. This was, water, landforms and people, and people work and development. In this coursework I shall include information on Carboniferous Limestone and how it is formed. I shall also give an introduction to Cheddar and the different parts of it such as the Gough's caves and Aladdin's caves and the gorge. ...read more.

Cheddar gorge is a very impressive part of Cheddar. The magnificent sheer cliffs and winding valley floor gives u a picture of what it once looked like as the river passed through and slowly carved out the Gorge. The gorge is about 2.8 kilometres long, of high and even intimidating cliffs, which reach to a high of around 200 metres, and vegetation and different kinds of animals. There are a number of possible theories on how Cheddar Gorge was formed. The 'cut back waterfall' theory is just one of them. Many people believe that a waterfall once flowed over the gorge. This waterfall kept cutting back until the Cheddar Gorge was formed. This is a good theory but still not as convincing as a good theory should be. Another theory is the one on the 'collapsed cavern.' The underground river that slowly eroded away the Carboniferous limestone would have caused this. But many experts don't agree with this theory because they all agree with that this would have taken much to long to happen. This would take time because chemical weathering is so slow in the surrounding climate in Cheddar, even millions of years ago. ...read more.

The second cave, Lox's cave that I visited was very different to Gough's cave on a way that it had been 'transformed' into more of a tourist attraction. Aladdin's cave was also a good cave to look at different features, but again, it had a 'touristy' feeling to it as it had illuminated areas. Reflections of the features in the mirror pool were also good to look at. This cave also dhows the different colours in the flowstone, caused by iron oxide, which made the stone red. Copper minerals made the stone go green and the lead minerals made the stone go grey. All of these features take tens of thousands of years to develop to the stage that they are now and that is why these caves are an important place, especially because Cheddar is the only Limestone built area in the South west of England. At the end of the trip to Cheddar I realized that I had learned many things that I never new bout. The nature of the limestone is amazing as can be seen, where stalagmites and stalactites, and flowstone and columns and chambers can be formed out of just one type of rock. ...read more.