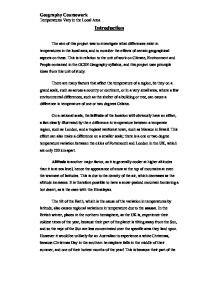 The aim of this project was to investigate what differences exist in temperatures in the local area, and to consider the effects of certain geographical aspects on these.

Introduction The aim of this project was to investigate what differences exist in temperatures in the local area, and to consider the effects of certain geographical aspects on these. This is in relation to the unit of work on Climate, Environment and People contained in the GCSE Geography syllabus, and this project uses principle ideas from this unit of study. There are many factors that affect the temperature of a region, be they on a grand scale, such as across a country or continent, or in a very small area, where a few environmental differences, such as the shelter of a building or tree, can cause a difference in temperature of one or two degrees Celsius. On a national scale, the latitude of the location will obviously have an effect, a fact clearly illustrated by the e difference in temperature between a temperate region, such as London, and a tropical rainforest town, such as Manaus in Brazil. This effect can also make a difference on a smaller scale; there is a one or two degree temperature variation between the cities of Portsmouth and London in the UK, which are only 120 km apart. Altitude is another major factor, as it is generally cooler at higher altitudes than it is at sea level, hence the appearance of snow at the top of mountains at even the warmest of latitudes. This is due to the density of the air, which decreases as the altitude increases. It is therefore possible to have a snow-peaked mountain bordering a hot desert, as is the case with the Himalayas. The tilt of the Earth, which is the cause of the variation in temperatures by latitude, also causes regional variations in temperature due to the season. In the British winter, places in the northern hemisphere, as the UK is, experience their coldest times of the year, because their part of the planet is tilting away from the Sun, and so the rays of the Sun are less concentrated over the specific area they land upon. ...read more.

The CBD of both Portsmouth and Southsea is located on the southwest of the island. These are marked on my map in the planning section of this report. Because of this, the route along which I collected my results did not include the CBD, and therefore I would not expect the heat island effect to be so great. There was, however, a rise in the first temperature recorded at site 5 on Friday, which is geographically near the centre of the island, and essentially very close to the very densely populated region of Buckland. I will conclude from this that there is some effect caused by proximity to the CBD, although on the days the results were collected, it was not great enough to be noticed by the results table. Evaluation The aim of this project was to investigate any differences or variations between temperatures in the local area. Using the range of sites I chose, with a variation in microclimates, I have discovered that there is a variation in temperature related to distance from the sea, as well as many microclimatic variations that I included, such as the effect of a different surface, and of direct sunlight In relation to the aim of the project, I believe I have fulfilling the aim. I believe that I chose two good days on which to take the temperatures - two consecutive days with slightly different weather conditions - but still reflecting the general pattern of weather in the UK in summer. There were no obvious deviations from the general pattern of things, and no anomalous results. I believe that some of the general interpretations I made from my results were not truly justified by the results, and I believe I gave reasons for this in my Interpretation. I will regard this project as a success, and it would be interesting to repeat the study again, under similar conditions, but centralising on a particular type of temperature variation, with more sophisticated equipment than just a thermometer, so I can draw more detailed and founded conclusions. ...read more.