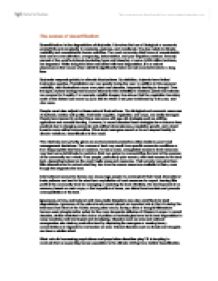 The causes of desertificationDesertification is the degradation of drylands. It involves the loss of biological

The causes of desertification Desertification is the degradation of drylands. It involves the loss of biological or economic productivity and complexity in croplands, pastures, and woodlands. It is due mainly to climate variability and unsustainable human activities. The most commonly cited forms of unsustainable land use are overcultivation, overgrazing, deforestation, and poor irrigation practices. Seventy percent of the world's drylands (excluding hyper-arid deserts), or some 3,600 million hectares, are degraded. While drought is often associated with land degradation, it is a natural phenomenon that occurs when rainfall is significantly below normal recorded levels for a long time. Drylands respond quickly to climatic fluctuations. By definition, drylands have limited freshwater supplies. Precipitation can vary greatly during the year. In addition to this seasonal variability, wide fluctuations occur over years and decades, frequently leading to drought. Over the ages, dryland ecology has become attuned to this variability in moisture; plants and animals can respond to it rapidly. For example, satellite imagery has shown that the vegetation boundary south of the Sahara can move by up to 200 km when a wet year is followed by a dry one, and vice versa. People must also adjust to these natural fluctuations. The biological and economic resources of drylands, notably soil quality, freshwater supplies, vegetation, and crops, are easily damaged. People have learned to protect these resources with age-old strategies such as shifting agriculture and nomadic herding. However, in recent decades these strategies have become less practical due to changing economic and political circumstances, population growth, and a trend towards more settled communities. When land managers cannot or do not respond flexibly to climate variations, desertification is the result. The relatively low priority given to environmental protection often leads to poor land management decisions. ...read more.

The indirect economic and social costs suffered outside the affected areas, including the influx of "environmental refugees" and losses to national food production, may be much greater. Action programmes for combating desertification The Convention to Combat Desertification is being implemented through national action programmes (NAP). Developed country Parties and affected country Parties are expected to consult on their respective roles in supporting these programmes, which can result in a more holistic, integrated and participatory management of natural resources in drylands ecosystems. Once significant effort has been made to design a framework programme, international solidarity might facilitate the launching of specific projects and activities under the agreed policies, in an effective manner and without creating excessive transactional burden. Because programmes need to be adapted to particular regional circumstances, most of the specific requirements are described in the five regional implementation annexes for Africa, Asia, Latin America and the Caribbean, the northern Mediterranean and Central and Eastern Europe. As at August 2005, 77 National Action Programmes (NAPs) had been prepared and adopted. These instruments are considered to be core references for an ongoing process of planning for poverty reduction and the sustainable development of drylands. Efforts to combat desertification should be fully integrated into other development programme frameworks. Reversing land degradation and alleviating poverty go hand in hand. Both involve improving food security, educating and training people, strengthening the capacity of local communities, and mobilizing non-governmental organizations. Similarly, because desertification affects and is affected by environmental concerns such as loss of biological diversity and climate change, NAPs need to have a great potential to promote synergies with other programmes dealing with such issues. However, improved data at the country level and stronger recognition of the NAPs have yet to manifest this potential fully through concrete initiatives. ...read more.

which can prevent plant growth. When the practices described above coincide with drought, the rate of desertification increases dramatically. Increasing human population and poverty contribute to desertification as poor people may be forced to overuse their environment in the short term, without the ability to plan for the long term effects of their actions. Where livestock has a social importance beyond food, people might be reluctant to reduce their stock numbers. WHAT ARE THE EFFECTS OF DESERTIFICATION? Desertification reduces the ability of land to support life, affecting wild species, domestic animals, agricultural crops and people. The reduction in plant cover that accompanies desertification leads to accelerated soil erosion by wind and water. South Africa losing approximately 300-400 million tonnes of topsoil every year. As vegetation cover and soil layer are reduced, rain drop impact and run-off increases. Water is lost off the land instead of soaking into the soil to provide moisture for plants. Even long-lived plants that would normally survive droughts die. A reduction in plant cover also results in a reduction in the quantity of humus and plant nutrients in the soil, and plant production drops further. As protective plant cover disappears, floods become more frequent and more severe. Desertification is self-reinforcing, i.e. once the process has started, conditions are set for continual deterioration. HOW CAN DESERTIFICATION BE HALTED? To halt desertification the number of animals on the land must be reduced, allowing plants to regrow. Soil conditions must be made favourable for plant growth by, for example, mulching. Mulch (a layer of straw, leaves or sawdust covering the soil) reduces evaporation, suppresses weed growth, enriches soil as it rots, and prevents runoff and hence erosion. Reseeding may be necessary in badly degraded areas. Mulching and reseeding are expensive practices. However, the only realistic large-scale approach is to prevent desertification through good land management in semi-arid areas. ...read more.