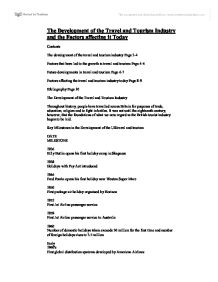 The Development of the Travel and Tourism Industry and the Factors affecting it Today Contents The development of the travel and tourism industry Page 3-4 Factors that have led to the growth in travel and tourism Page 4-6 Future developments in travel and tourism Page 6-7 Factors affecting the travel and tourism industry today Page 8-9 Bibliography Page 10 The Development of the Travel and Tourism Industry Throughout history, people have travelled across Britain for purposes of trade, education, religion and to fight in battles. It was not until the eighteenth century, however, that the foundations of what we now regard as the British tourist industry began to be laid. Key Milestones in the Development of the UKtravel and tourism DATE MILESTONE 1936 Billy Butlin opens his first holiday camp in Skegness 1938 Holidays with Pay Act introduced 1946 Fred Pontin opens his first holiday near Weston Super Mare 1950 First package air holiday organised by Horizon 1952 First Jet Airline passenger service 1959 First Jet Airline passenger service to Australia 1960 Number of domestic holidays taken exceeds 30 million for the first time and number of foreign holidays rises to 3.5 million Early 1960's First global distribution systems developed by American Airlines 1968 Countryside Act passed to create national parks 1969 Development of Tourism Act introduced 1976 Concorde goes into service 1981 60 per cent of households in the UK have ...read more.

The growth of package tours The 1960s saw the beginning of the rapid increase in the number of package holidays sold. Destinations such as the costal area of Southern Spain, the Balearic Islands and Greece were favourite locations for British and other European travellers. Today in the region of 15 million package holidays are sold to British tourists each year. Long-haul destinations Long-haul destinations are generally considered to be those beyond Europe, for example the USA, Australia, the Far East and India. Advances in aircraft technology, coupled with low prices offered by some of the mayor holiday companies, have open up many new long-haul destinations in recent years. Places such as Florida, the Gambia, the Caribbean, Goa, Hong Kong, South Africa and Australia have all become popular with British tourists. Call centres A call centre is a customer service department that uses trained staff available over telephone lines. A company or organisation may have their own call centre or may hire out this function to a call centre company. Ontario has more than 3,000 call centres providing service in every industry from financial to government, tourism, travel, manufacturing, technology and the arts, and over 30 service bureaus. Call centre companies offer complete menus of business-to-business and customer-driven services. The industry is growing at a rate of 20 percent per year. ...read more.

Provided access to flight information, times, fares and seat availability and passenger reservations. View data: Is the main tool used by tour operators to sell their holidays? It is a simple booking system which displays information transmitted by public telephone lines. Global distribution system: This is a system that links up several CRS and presents information to the travel agent. Political In recent years the strength of the pound against many other currencies has made it expensive to travel to the UK. The fact that Britain has remained outside the single currency (euro) has made it costly for Europeans in particular to visit. Inbound tourism has been affected by September 11th, Foot and Mouth in 2001 and the Iraq War of 2003. Recent figures show that British tourism has weathered these storms. While aftershock from September 11th touched nearly everyone and everything across the U.S. and beyond, no industry has been more affected than the travel and tourism industry. Images of commercial airplanes piercing Manhattan's skyline, horror stories of airport security, and accounts of nervous airline passengers subjected to a gauntlet of persistent check-in procedures upset the travelling public. Despite increased security, travellers remain wary. Although a number of travel and tourism companies have reported a decrease in demand of 30% and more following the terrorist attacks, the long-term outlook for travel and tourism demand is expected to slowly brighten as consumer confidence about safety and security recover. ...read more.