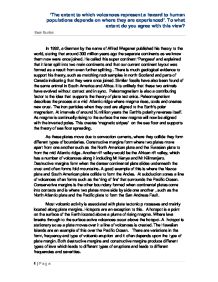 The extent to which volcanoes represent a hazard to human populations depends on where they are experienced. To what extent do you agree with this view?

In 1992, a German by the name of Alfred Wegener published his theory to the world, stating that around 300 million years ago the separate continents as we know them now were once joined. He called this super continent 'Pangaea' and explained that it later split into two main continents and that our current continent layout was formed as a result from even further splitting. There is much geological evidence to support his theory, such as matching rock samples in north Scotland and parts of Canada indicating that they were once joined. Similar fossils have also been found of the same animal in South America and Africa. It is unlikely that these two animals have evolved without contact and in sync. Paleomagnetism is also a contributing factor to the idea that supports the theory of plate tectonics. Paleomagnetism describes the process at a mid Atlantic ridge where magma rises, cools and creates new crust. The iron particles when they cool are aligned to the Earth's polar magnetism. At intervals of around 3/4 million years the Earth's polarity reverses itself. As magma is continually rising to the surface the new magma will now be aligned with the inverted poles. ...read more.

In the United States' history it is the most economically destructive killing 57 people and destroying over 250 homes. One main thing to consider when discussing the title is to take into account at what boundary the volcano is at, whether it is constructive or destructive. Partial melting is the name that describes the process of melting crust. As the denser oceanic crust slides under the continental crust, the oceanic crust is melted by the magma. The silica that is trapped in the oceanic crust is released from the rocks and raises the silica content of the surrounding magma. This increased silica content produces very viscous lava which is acidic, otherwise known as Felsic (rhyolitic) lava. It also results in the eruptions being highly explosive releasing lava bombs and is often the type of volcano that releases pyroclastic flows. This is why I think the title is not specific enough; you could be miles away from a volcano but still suffer from some of the effects produced by an eruption. Some eruptions have global effects whereas some eruptions have minor effects and only affect a small radius of the surrounding area. The eruption of the Soufriere Hills, Montserrat in 1995 through to 1997 was a localised problem in comparison to other eruptions. ...read more.

They were not prepared for any kind of eruption and as they were an LEDC there was little primary responses given. The eruption of Soufriere Hills is a good example of an eruption in an MEDC. Evacuation took place, aid was given, safe zones were set up and further monitoring of the volcano took place. In many MEDC there is constant monitoring of the volcano for signs of eruptions. Scientists are hired to look for slight changes in activity. In most LEDCs there is not this funding for monitoring and little preparations for if/when there is an eruption. I do agree with the statement to some extent and it is hazardous to the human population the closer you go, however the degree of danger does change dependent upon several other factors. The degree of danger is far greater at a destructive margin due to the rise in silica content and more acidic lava as well as the more violent eruptions. The type of volcano also changes the severity and whether it takes place in an LEDC or MEDC is also a contributing factor. I do agree with the statement but other factors need to be included. ?? ?? ?? ?? 'The extent to which volcanoes represent a hazard to human populations depends on where they are experienced'. To what extent do you agree with this view? Sam Burton 1 | Page ...read more.