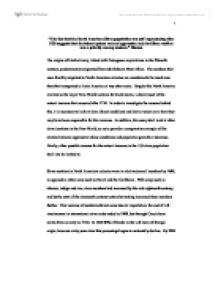 The fact that the North American Slave population was self-reproducing after 1730 suggests that the labour system was not oppressive and that Slave welfare was a priority among masters. Discuss

"The fact that the North American Slave population was self-reproducing after 1730 suggests that the labour system was not oppressive and that Slave welfare was a priority among masters." Discuss The origins of black slavery, linked with Portuguese explorations in the fifteenth century, predominately originated from sub-Saharan West Africa. The numbers that were forcibly migrated to North American colonies are considered to be much less than that transported to Latin America or any other areas. Despite this North America evolved as the major New World location for black slaves, a direct result of the natural increase that occurred after 1730. In order to investigate the reasons behind this, it is necessary to look at slave labour conditions and slave owners as to how they may have been responsible for this increase. In addition, this essay shall look at other slave locations in the New World, so as to provide a comparative example of the relation between oppressive labour conditions and population growth or decrease. Finally, other possible reasons for the natural increase in the U.S slave population shall also be looked at. Slave numbers in North American colonies were in relatively small numbers by 1680, as opposed to other areas such as Brazil and the Caribbean. With crops such as tobacco, indigo and rice, slave numbers had increased by the mid eighteenth century, and by the start of the nineteenth century cotton harvesting increased these numbers further. ...read more.

From this it can be derived that as slaves were property, it was in the master's interest to keep them as well as is necessary. Slave diets in the U.S south were better than that in the West Indies. General food shortages in the U.S were overcome by the end of the seventeenth century. Dense slave populations in Virginia, Maryland and South Carolina coincided with the fact that these areas were major exporters of grains and meats before the American Revolution. Thus it can be argued that this excess meant slaves would have access to these commodities. Abraham Lincoln, in his address at the Cooper Institute in 1860 stated that: "Much is said by southern people about the affection of slaves for their masters and mistresses...a plot for an uprising could scarcely be devised and communicated to twenty individuals before some of them, to save the life of a favourite master or mistress, would divulge it."4 There is however generally very little evidence to suggest that slave welfare was a priority of slave masters. In 1669, A Law of the colony of Virginia passed an act about the casual killing of slaves, which protected the master from molestation (prosecution) if he had killed his slave. From this we can see that the welfare of the slave was regarded as below the laws and constitution, which effectively turned slaves into sub-humans, and more like cattle. ...read more.

Yet malnutrition, disease and violence were often part of a U.S slave's life in the south. They were generally overworked, underfed and lacked the basic human rights that existed at the time. Therefore, while the labour system in U.S slavery was not as oppressive elsewhere, it was still very oppressive and did little to assist natural increase. The welfare of a slave did not generally extend to the level that would significantly increase the slave population. It is more likely that a natural population increase existed in the U.S after 1730 as they were living in a country which was also experiencing natural increase. Fertility rates were higher in slave women from North America as opposed to other slave colonies, due to breast-feeding methods. Also, due to the family mentality on slave plantations, there was less division or breaking up of families in the U.S. Also it has been commented that the temperate climate of the U.S allowed natural increase to occur, a fact that is backed up by Barbados's experience. However, it is important to look at the fact that in other slave colonies slaves were continually being transported, which caused very high mortality rates, both during travel and after as well. Therefore there is little evidence to support the theory that the labour system was not oppressive in the U.S and that slave welfare was a priority, simply by looking at the natural increase of the slave population. ...read more.