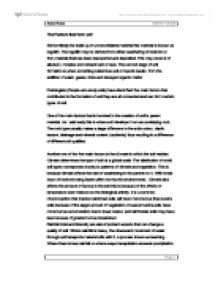 The Factors that form soil

The Factors that form soil Soil is initially the build up of unconsolidated material this material is known as regolith. The regolith may be derived from either weathering of bedrock or from material that has been transported and deposited. This may consist of alluvium, moraine and volcanic ash or lava. The second stage of soil formation is when something called true soil or topsoil results from the addition of water, gases, biota and decayed organic matter. Pedologists (People who study soils) have identified five main factors that contributed to the formation of soil they are all connected and can form certain types of soil. One of the main factors that is involved in the creation of soil is parent material. ...read more.

However tundra soils have more humus accumulation due to lower output, and rainforests soils may have less because of greater humus breakdown Rainfall total and intensity are also important aspects that can change a quality of soil. Where rainfall is heavy, the downward movement of water through soil transports material silts with it, a process known as leaching. Where there is less rainfall or where evapotranspiration exceeds precipitation brings minerals upwards towards the surface by the process of capillary action. Temperature may affect the length of the growing season in a particular area it also affect the speed of decay of humus. The relief of the land also know as topography is also a factor that can affect the properties of a particular soil. ...read more.

Micro organisms help with the recycling of nutrients by decomposing dead organic material or biota which as the same time small organisms such as worms and termites mix and aerate the soil. One of the more overlooked factors of soil creation is that of time, soil usually takes about 400 years fro 1 cm of soil to form and under extreme conditions 1000 years for mm it can take 3000 - 12,000 years to produce a sufficient depth of mature soil for farming. Newly formed soils tend to retain the characteristics of the parent material for which they are derived. With the addition of time soils gain new characteristics resulting from organic material, activity of organism and leaching on the soil. Horizons or layers reflect the balance between the soil processes and the time that have been available for their development. ?? ?? ?? ?? Aaron Evans GG2 Mr Turnbull Page 1 ...read more.