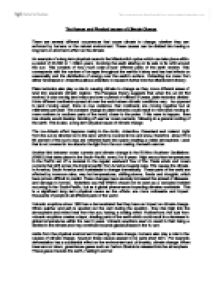 The Human and Physical causes of Climate Change

There are several different occurrences that cause climate to change, whether they are enforced by humans or the natural environment. These causes can be divided into having a long term or short term effect on the climate.

An example of a long term physical cause is the Milankovitch cycles which can take place within a period of 20,000 to 1 million years, involving the earth altering on its axis or its orbit around the sun. This consists of how much solar power different parts of the earth receive. This corresponds with the number of ice ages throughout the earth’s history and has had effects on seasonality and the distribution of energy over the earth’s surface. Extracting ice cores from either Greenland or Antarctica allows scientists to research further into the Milankovitch theory.

Plate tectonics also play a role in causing climate to change as they move different areas of land into separate climatic regions. The Pangaea theory suggests that when the world first evolved, it was one big land mass and over a period of millions of years, plate tectonics divided it into different continents spread all over the world where climatic conditions vary. As opposed to land moving apart, there is now evidence that continents are moving together but at millimetres per year. The constant change in plate tectonics could result in more land moving to more northern or southern parts of the world, closer to the poles. If this were to happen, then ices sheets would develop blocking off warmer ocean currents, following in a general cooling of the earth. This is also, a long term physical cause of climate change.

The Ice–Albedo effect happens mainly in the Arctic, Antarctica, Greenland and Iceland. Light from the sun is directed on to the land, which is covered in ice and snow, therefore about 70 to 80 percent of the sun's rays are reflected back into space creating a colder atmosphere. Land that is not covered in ice absorbs the light from the sun making the earth warmer.

Another link between ocean currents and climate change is the El Nino Southern Oscillations (ENSO) that takes place in the South-Pacific, every 2 to 9 years. High sea surface temperatures in the Pacific set off a reversal in the regular westward flow of the Trade winds and ocean currents that drift across the tropical pacific from America towards Asia. This causes the climate in America, South America and Australasia to change dramatically. These parts of the world are affected by monsoon rains, very hot temperatures, shifting storms, floods and droughts, which have proven difficult to predict. These changes have severely increased the spread of diseases and damage to homes.  Scientists say that ENSO should not be seen as a secluded incident occurring in the South-Pacific, but as a global phenomenon impacting climates worldwide. This is a significant long term physical cause as the effects are more noticeable and impact thousands of people in all different parts of the world.

Volcanic eruptions since 1980 have demonstrated that they have an impact on climate change. When sulphur and ash is spurted out the vent during the eruption, they rise high into the atmosphere and reflect heat from the sun, having a cooling effect. Furthermore, the dust from volcanic eruptions creates a layer, shading parts of the earth which could result in a decrease in global temperatures within the next 5 years. Volcanic eruptions seem to result in their being a decline in the climate and may contribute towards glacial phases in the future.

Aside from the physical environment impacting climate change, humans also play a role in the causes of climate change, however these causes appear to be quite short term. For example, deforestation has a substantial effect on the environment and ultimately, climate change. When trees are cut down, greenhouse gases such as Carbon Dioxide is released into the atmosphere. These gases insulate the earth, making it warmer.

Deforestation also leaves soil bare and exposes it into absorbing heat from the sun, which has a heating effect too. There is a natural balance that exists between vegetation and the atmosphere, once a lot of deforestation has taken place then an imbalance is created resulting in more environmental problems.

On the whole, the physical environment is having a long term effect on the climate while the human impact is short term. This shows that as much as humans try to reduce their carbon emissions, recycle and generally try to save the environment, they are going to be unsuccessful because what they are doing has an insignificant impact on climate change. The earth is heating itself up and there is little that humans can do about it. However, there has been research that suggests we are due for another ice age. The human and physical causes of climate change are clear, it is what to do about them that is not so obvious.