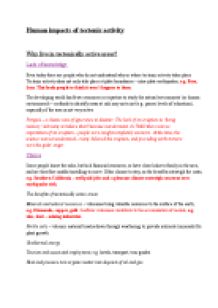 ﻿Human impacts of tectonic activity Why live in tectonically active areas? Lack of knowledge: Even today there are people who do not understand why or where tectonic activity takes place. Tectonic activity does not only take place at plate boundaries ? intra-plate earthquakes, e.g. Bam, Iran. This leads people to think it won?t happen to them. The developing world has fewer resources or expertise to study the natural environment (or human environment) ? methods to identify areas at risk may not exist (e.g. poorer levels of education), especially if the area is not very active. Pompeii ? a classic case of ignorance to disaster. The lack of an eruption in ?living memory? led many to believe that Vesuvius was dormant. In 79AD there was no expectation of an eruption ? people were caught completely unaware. ...read more.

Impacts on people and possessions: The severity of the impacts depends on physical factors (e.g. event profiles, geology, terrain) and human factors (e.g. population density). Physical impacts on people: Damage/destruction of property and infrastructure. Volcanoes – luckily ¾ of erupted lava is from underwater volcanoes, much of it along ocean ridges, so the impact is minor. The greatest risk is at destructive plate margins. Most active volcanoes are found in the developing world, e.g. Latin america, the Caribbean, parts of Asia and the south-west Pacific. Increased urbanisation and population growth concentrates people and infrastructure. Earthquakes – the worst earthquakes are not necessarily those with the largest magnitude. The worst impacts are felt in densely populated areas and areas with high vulnerability. Economic impacts on people: These can be direct or indirect. ...read more.

Usually greater in developing countries than developed. Secondary casualties ? those that survive the event itself but die/are injured due to insufficient resources or lack of medical care. Again, usually greater in developing countries than developed. Tertiary casualties ? those with pre-existing medical conditions that are aggravated by the event. Includes those who become ill/die. For example, through disease contracted in the post-disaster environment. In developing countries, these are often the largest group of casualties. Poverty reduces the capacity to reduce the impacts, or to recover. Environmental degradation reduces natural impact buffers, e.g. mangrove removal (Indian Ocean, 2004), and therefore contributes to delaying recovery time. Note: to more accurately compare the impacts in developed and developing countries, it is better to use damage cost as a % of GDP, as developed countries have more infrastructure, etc., to be damaged. The absolute costs may be lower in a developing country, but the relative costs (as a % of GDP) are likely to be much higher. ...read more.