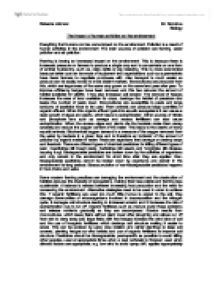 The impact of human activities on the environment

The impact of human activities on the environment Everything that humans do has some impact on the environment. Pollution is a result of human activities in the environment. The main sources of pollution are farming, water pollution and air pollution. Farming is having an increased impact on the environment. This is because there is increased pressure on farmers to produce a single crop and to concentrate on one form of animal husbandry, such as, dairy cattle or pig breeding. This is more economical because better use can be made of equipment and organizations such as supermarkets have fewer farmers to negotiate purchases with. Also transport is much easier so produce can be easily moved to more distant markets. Monocultures are produced from this, which are large areas of the same crop grown on the same land year after year. To improve efficiency hedges have been removed and this has reduced the amount of habitat available for wildlife. It has also increased soil erosion. The removal of hedges increases the area of land available for crops, destroys the habitat of predators and keeps the number of pests down. Monocultures are susceptible to pests and large amounts of pesticide have to be used. Farm animals can produce large quantities of organic effluent. When this organic effluent gets into aquatic ecosystems it can cause a rapid growth of algae and plants, which leads to eutrophication. ...read more.

Oil spillages are another source of water pollution. These occur as a result of tankers accidentally spilling crude oil into the sea. This is catastrophic as oil floats and Oxygen diffusion from in the air is inhibited by the resultant oil slick. The aquatic organisms often die due to lack of oxygen and plants can't achieve light for photosynthesis. Below the oil putrefaction can take place and bacterial action leads to the highly toxic gas, hydrogen sulphide been produced. Additionally oil affects the feathers of water birds and contamination can result in their inability to fly and they lose their buoyancy. Another cause of water pollution is suspended solids, which can cause many problems for organisms. The suspended particles intercept light, reducing photosynthetic productivity, which has an adverse effect on the consumers in food chains. The pottery industry has contributed to this problem in the past, because fine particles such as waste china clay are particularly harmful. The particles are so small bivalves such as mussels take them in. These filter feeders cannot cope with the sheer volume of particles and perish as their feeding and gaseous exchange mechanisms are inhibited. If particles continue to silt up the bottom of the water habitat then many more organisms are harmed by the continued coverage, e.g. bloodworms (Tubifex). Excess mineral ions such as phosphates and nitrates in sewage are another cause of water pollution. ...read more.

These are used in plastics manufacture, and they are released during this manufacture. However more is given off during incineration of plastics waste. They can build up in animal tissues and have been found in fat cells in seals. PCBs are also considered to be carcinogenic. Air pollution is a threat to the Ozone layer because chlorine, nitrogen oxides and CFCs react to break down it down by a variety of mechanisms. This Ozone layer (O3) is high up in the stratosphere at about 20-30km and is important because it absorbs UV radiation. This therefore prevents humans from getting skin cancer, cataracts and problems with their immune systems. Air pollution will be decreased if there is a legislation and international agreement to limit or ban toxic emissions, such as, sulphur dioxide reduction. Cars could use low sulphur fuel and catalytic converters to prevent too many toxic emissions. Methane gas is produced from organic waste and is an excellent alternative to fossil fuels. Also scrubbing of waste gases at coal-fired power stations reduces SO2 emission. In conclusion it is clear that humans are having a major impact on the environment in terms of water, air and farming pollution. This is mainly due to the fact that alternative strategies (i.e. pollution controls and recycling) are not been put into practice as effectively as they could be. There needs to be government legislation and national agreements if these strategies are to be effective in reducing the effects of pollution over time. ?? ?? ?? ?? Rebecca Johnson Mr. Donohue Biology ...read more.

This question addresses some important ways in which humans affect the enviromment. It does not mention some other important ways (such as deforestation). It includes some good use of scientific/technical language. More detailed case study information would improve it further, as would some comment about which effects are the most significant on a global scale.