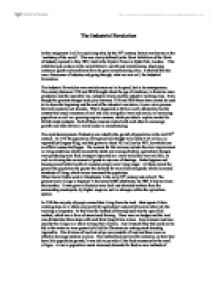 The Industrial Revolution In this assignment I will be explaining why, by the 19th century, Britain was known as the 'workshop of the world'. This was clearly defined by the Great Exhibition of the Work of Industry opened in May 1851, held in the Crystal Palace in Hyde Park, London. This exhibition put on show to the world Britain's wealth and inventiveness, displaying consumer goods and machinery from its great manufacturing cities. It showed that she was a forerunner of industry and going through, what we now call, the Industrial Revolution. The Industrial Revolution was revolutionary not in its speed, but in its consequences. The century between 1750 and 1850 brought about the age of machines, in factories mass production and the assembly line, industrial towns and the industrial working class. Even though the greatest changes took place between 1750 and 1850 these dates cannot be used to tie down the beginning and the end of the industrial revolution, it was a slow process that took centuries not decades. Why it happened in Britain is still debateable, but the country had ample resources of coal and iron, navigable rivers and canals, an increasing population as well as a growing empire overseas, which provided a captive market for British made products. ...read more.

He was the forerunner of other developments in agricultural implements, particularly the harrow and the plough, both of which were, by 1820, made wholly of iron. Another branch of agriculture was developed called stockbreeding. The most famous leader in this field being Robert Bakewell. He specialised in pedigree stock, selected for a particular purpose. He fed and housed his animals with care and he kept elaborate genealogical tables of this results. These changes though would have been in vain, if there had been no enclosure movement. Enclosure had begun gradually with a number of private acts of parliament between 1760 and 1815 being passed for individual landowners. In 1801 a General Enclosure Act was passed and by 1850 nearly all the agricultural land of England was enclosed. These enclosures worked to the advantage of the landowner and to the detriment of the villager who toiled on the land. The villagers found themselves in receipt of legal bills, which they could not afford and, as likely as not, they could not produce evidence of any legal claim to their land so lost their squatters rights and were kicked out of their homes. Despite this until 1850 more workers were needed on the land than anywhere else. Agriculture was still the biggest single employer though the ratio was to decline by the mid 19th century. ...read more.

The introduction of the steam engine further improved the output. The first ironmaster to use steam power to blow the blast furnaces and to drive the hammer at a forge was John Wilkinson at his ironworks in Shropshire. The need to transport coal cheaply and quickly then aided the development of the railways. James Watt made improvements to his steam engine and, with investment from his business partner Matthew Bolton, a new form of transport was developed. Matthew Bolton stated 'I sell here, sir, what all the world desires to have - Power'. Soon railways covered the country and trains overtook canals and rivers as the main form of transport for goods and passengers. At the end of the 19th century there had been enormous growth in output. By 1870 the U.K. produced 45% of the worlds cotton cloth and 50% of the worlds pig-iron but Britain's manufacturing dominance was to be short-lived. It was only half a century after the Great Exhibition that U.S.A and Germany was challenging Britain's production levels. New materials of various kinds and new sources of power began to be discovered and developed and to take up positions in the industrial picture so that Britain's mainstay of coal, iron and steel, wool and cotton lost their central place world industry. The industrial revolution was still ongoing but no longer would Britain be the sole leader. ...read more.