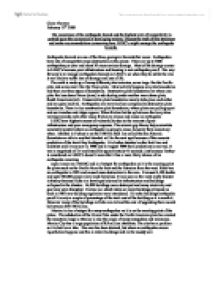 The occurence of the earthquake

Earthquake hazards are one of the three geological hazards that occur.  Earthquakes have lots of energy that cause destruction on the planet.  There are up to 3000 earthquakes per year and about 30 cause serious damage.  Most of the damage occurs in LEDC’s because poor infrastructure and housing is not earthquake proof.  The way forward is to manage earthquakes hazards in LEDC’s so when they do strike the area is not likely to suffer lots of damage and loss of life.

LEDC have highest amount of vulnerability due to the amount of poor infrastructure and poor emergency response. The seismic gap theory helps scientists accurately predict where an earthquake is going to occur, however they cannot say when.  Istanbul in Turkey is on the 1500 km fault line called the San Antonio.  Scientists are able to say that Istanbul will be the next spot because of the accurate prediction of the Izmit Bay Earthquake.  It is before Istanbul on the fault line and scientists said it was next in 1998 and in August 1999 their predictions came true. It was a magnitude of 2.4 and lasted for approximately 45 seconds. Just because Turkey is considered an LEDC’s doesn’t mean that it has a more likely chance of an earthquake occurring.

Japan is seen as a MEDC and is a hotspot for earthquakes as it is the meeting point for plates such as the Pacific from the East and the Eurasian from the west. Kobe has an earthquake in 1995 and caused mass destruction to the area.  It caused 4,500 deaths and upto 100,000 people were made homeless. It was seen as the most costly disaster in history because Kobe is a developed city and its infrastructure and buildings collapsed in the disaster.  56,000 buildings were destroyed and many electricity and gas lines were disrupted.  It came as a shock when so many buildings collapsed as back in 1981 new building regulation were introduced.  To make buildings earthquake proof it is only a couple of percentage of the total cost of the building so it is worth it.  However many of the buildings in Kobe are old and the cost of upgrading them would be between $50-100 billion.

Mexico is also a hotspot for many earthquakes as it is on the meeting point of the plates.  The subduction of the Cocos Plate under the North American plate has created the mountain range in Mexico is also the cause of many eartquakes and volcanoes.   Mexico City has a large population of 8.8 million inhabitats. The city has a problem as it is built on a lake.  The area has been drained, but when an earthquake occurs liquefaction happens and this is where buildings sink in the muddy soil.

One building is considered the safest in the world and it is located in New Mexico, Mexico.  Torres Major has foundations that are 3 times as deep as the Empire Building at 60m.  These steady foundations go into the hard bedrock beneath and absorb the energy from the earthquake. The designer Dr Leonardo Zeevaert when took the project on considered ways in which he could make the building as earthquake proof as possible.Shock absorbers were added to the buildings so that when the earth shock the building would move with it.  This was to prevent the building becoming to stationary and beening shock to death when a earthquake occurs.

Although Mexico City has one of the safetest building much of the rest of the city has no such luck.  More than 1,000 private homes need more attention, but they have no where else to go, so the work cannot take place. There is also severe overcrowding in the city which has caused 32 apartments in the city to be crammed with 450 people.  This has caused the problem of families knocking down supporting walls to make the apartments bigger.  Knocking down walls has caused the buildings’ stability to weaken and more chance of collapsing. There is also the problem that there is no building regulations and no education to the local people about how to make homes safer, which should be the government’s priority.

LEDC’s are more likely to suffer building damage because of poor construction and unreliable building materials. In Istanbul, Turkey the country should try and get ready for the earthquake that is predicted to come, however they are not.  There has been an increase in the number of buildings both illegal and legal due to the increase of population that are migrating to the capital.  50% of the new builds are illegal as the contractors are more concerned about money and profits than safety.  It is predicted that if the earthquake happens about 70% of the buildings will be flattened due to the vibrations.

It would be recommended that for places like Turkey, to rigorously enforce building regulations.  There should be an improvement in the way buildings are designed such as having deeper foundations or added cross bracing for more stability.  The way in which concrete is mixed is also important in helping the structure be sturdier.

Overall lots of damage has occurred in LEDC’s because of lack of money in building better and more earthquake proof buildings.  In the future places like Turkey that are bound to have an earthquake should have more inspectors to enforce and insure better housing is built.  Although Mexico has built the safest building in the world, they have neglected much of the private houses in which the poorest of people live. If there is an earthquake in the near future Mexico and other LEDC countries will still have the same destruction as they did before.