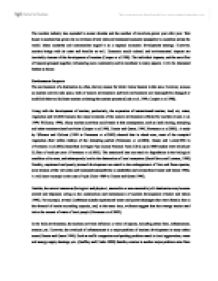 The pros and cons of an increased tourism industry

The tourism industry has exploded in recent decades and the number of travellers grows year after year. This boom in tourism has given rise to millions of new jobs and increased economic prosperity in countries across the world. Many countries and communities regard it as a regional economic development strategy. However, tourism brings with its costs and benefits as well. Economic social-cultural and environmental impacts are inevitably element of the development of tourism (Cooper et al.1998). The individual impacts, and the net effect of impacts grouped together, influencing local community and its members in many aspects. It will be discussed further as below. Environment Impacts The environment of a destination is, often, the key reason for initial visitor interest in this area. However, as soon as tourism activity take place, both of natural environment and built environment are inescapability changed or modified either to facilitate tourism or during the tourism process (Cook et al, 1999, Cooper et al.1998). Along with the development of tourism, particularly, the expansion of nature-based tourism, land, air, water, vegetation and wildlife become the major elements of the natural environment affected by tourism (Cook et al, 1999, Williams, 1994). Many tourism activities could result in this consequence, such as land clearing, trampling and other tourism-related activities (Cooper et al.1998, Hunter and Green, 1996, Newsome et al.2002). A study by Whinam and Chilcott (1999 in Newsome et al.2002) showed that in shrub area, most of the trampled vegetation died within 42days of the trampling period (Newsome et al.2002). ...read more.

Tourism spending can generate income for both the public and private sectors, but the most significant impact lies in its output multiplier effect, and it tend to correlated with the size of the economy (Fletcher,1989).If the level of local ownership of tourism operation and diversity of economy are high, the destination's economy is likely gain more benefits from tourism expenditure. As many studies indicate this factors (eg.Fletcher,1989). Furthermore, tourism development helps to improve living standards for local residents, particularly, for those who directly involved in the industry, via several channel: provides a wide variety of employment, strengthens the overall job market and adds household income (Godfrey and Clarke, 2000). Meanwhile, it encourage economic independence as well, because tourism-related business and jobs require lower threshold, this particular benefit young people and other people whom with little skill or experience (Crandall, 1994,Godfrey and Clarke, 2000). Many data indicate this factor, such as Smyth (1999 in Newsome et al.2002) estimate that visitors to Glacier National Park generate $74 million in output, $41million in income, and 2531 jobs in 1990, and this account for 4% of the region's income and 7%of the region's jobs. Moreover, tourist spending helps to enhance the local quality life in many ways. For instances, people can take advantage of enhancement in community infrastructure, and superstructure as well (Cook et al, 1999). As tourist spending usually help a destination improve its facilities through tourist revenues, and create new opportunities for recreation and other leisure pursuits. Just as in London, many theatres can survive only because of the income of tourists (Mill and Morrison, 1992). ...read more.

There are many elements act as determinants; both of the natural of supply side and demand side play an important role (Cooper et al.1998, Godfrey and Clarke, 2000). Including local morphology, ecology and environmental quality, the type of tourism activity and number of visitors involved, the difference in social attributes between host and visitors, etc. (Godfrey and Clarke, 2000). In Newsome et al (.2002) 's comprehensive research illustrate this in terms of the different impacts caused by off-road vehicle in a rang of environment. To sum up, with the growth of tourism, the destination area and people always affected by the costs and benefits that tourism created. However, many of the gains are economic and often short-term in natural and, the costs, especially to the natural resource and social cultural, are tend to be long term or even permanent While the overall environment effect of tourism is may less than that of most other industries, but the most significance of its impacts lies in the fact that it often touch the most fragile, sensitive and the interesting parts of an area's landscape (Williams, 1994). Better planning and management of tourism is the key to deal with these issues, particularly, carry capacity should be take into consider (Cooper et al.1998). But, there is no universal solution suit every place. Each destination must understand their resource and their limitations, monitoring tourism impact, creating a positive tourism policy and management strategy, to minimize the negative impacts and maximize the benefits could gain from tourism industry. In the case of USA, the California's Watchable Wildlife Programme, using "six steps to sustainable success " lead to a notable hit (Carrison, 1997 in Newsome et al.2002). ...read more.