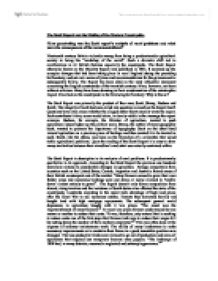 The Scott Report and the Making of the Modern Countryside - 'How penetrating was the Scott report's analysis of rural problems and what were the consequences of its recommendations?'

The Scott Report and the Making of the Modern Countryside 'How penetrating was the Scott report's analysis of rural problems and what were the consequences of its recommendations?' Nineteenth century Britain violently swung from being a predominantly agricultural society to being the "workshop of the world". Such a dramatic shift led to ramifications in all British factions especially the countryside. The Scott Report otherwise known as the Majority Report was published in 1942. It summed up the complex changes that had been taking place in rural England during the preceding half-century, and set out a series of plans and recommendations for the government to subsequently follow. The Report has been sited as the most influential document concerning the English countryside of the twentieth century. It has, however, not been without criticism. Many have been damning in their condemnation of the catastrophic impact it has had on the countryside in the following half century. Why is this so? The Scott Report was primarily the product of four men; Scott, Stamp, Hudson and Reath. The integrity of each has been called into question as much as the Report itself. ...read more.

living conditions in many county districts."vii Apart from the accommodation itself being bellow par, so were the services that were being provided in the village. "Thousands of cottages have no piped water supply, no gas, or electric light"viii. "In General, the services provided in the village whether of education, health or any other of the social services to be found in every town were of a standard far inferior to their urban counterpart."ix The Report then states failed government intervention in this area such as The Rural Water Supply Act 1934. It concludes that more needs to be done as to improve standards. Social life in the countryside is also briefly mentioned. It talks of the advent of the bicycle and motorcar and how this has meant dependency on neighbouring towns for amusement. Cultural life within the village itself is no longer centralised. Yet again there is no quantitative data upon which to base any of these generalisations. The Scott Report can be wholly seen as descriptive rather then quantitative. There are statistics pronged at random intervals but as a whole the document relies upon descriptive accounts. ...read more.

The Minority Report contained within the Report itself criticises the recommendations set out. "My differences with the Majority rest, not upon a negative attitude, but upon a different view of what positive policy is in the national interest. My colleagues seek their ends by measures which involve as little change as possible in the status quo; I seek measures which permit more dynamic adaptation."xiv Dennison is quite bold and ruthless in is dismemberment of the recommendations. He sees the report as potentially dangerous and predicts many future problems. The Scott Report can be seen in both a negative and positive light. The Report goes to great length to explain contemporaneous issues plaguing the countryside. It is penetrating to a certain extent, however, relies too heavily on narrative rather than quantitative data. It would have been far more influential had all the social and economic problems laid out in the report been predominantly based on national statistics. The repercussions of the Majority Report can still be felt today. Increased organisation and National parks have come out of the recommendations it set. Many of the recommendations however have merely been ignored or carried out to negative ends. The 1947 Town and Country Planning Act is one such case. In conclusion the ramifications of the recommendations are still felt today and not always with positive consequences. ...read more.

Accurate use of appropriate terminology. Clear and concise writing style shows the student has a very good knowledge and understanding of the topic. All parts of the title are addressed in a logical way throughout the essay and are summed up in the conclusion which relates back to the most significant parts of the essay. Useful case study examples are used to support statements and to show wider reading beyond just the Scott report itself.