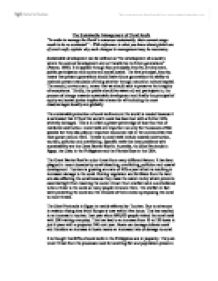 The Sustainable Management of Coral Reefs

The Sustainable Management of Coral Reefs "In order to manage the Earth's resources sustainably, their current usage needs to be re-evaluated" - With reference to what you know about global use of coral reefs, explain why such changes in management may be necessary. Sustainable development can be defined as "the development of a society where the costs of development are not transferred to future generations" (Pearce, 1993). It is applied through four principals; futurity, environment, public participation and equity and social justice. The first principal, futurity, means that present generations should leave future generations the ability to maintain present standards of living whether through natural or cultural capital. The second, environment, means that we should seek to preserve the integrity of ecosystems. Thirdly, the public should be aware of, and participate in, the process of change towards sustainable development and finally the principal of equity and social justice implies fair shares for all including the most disadvantaged locally and globally. The sustainable protection of coral reefs around the world is needed because it is estimated that 11% of the world's coral has been lost with a further 16% severely damaged. ...read more.

They are under threat from the processes used for catching fish and population pressure. The local people have started using dynamite as a means of catching fish but this is also damaging the coral. The ecosystem at this location has been completely exhausted due mainly to MEDC's sponsoring the exploitation of the aquarium trade. This has resulted in people having to turn to catching nocturnal fish. Deforestation is also affecting the coral because it leads to more silt in the ocean which smothers the coral eventually killing it. In Florida 45% of the coral has been lost since 1984. This is due to factors such as population pressure, pollution, coastal construction and tourism. Pollution damages the coral because sewage from boats and land can damage coral, as can water runoff containing chemicals, fertilizers, silt, and debris. Coastal construction is also affecting the coral because construction activities (like dredge and fill) can damage coral habitat and make the water murky. This is a problem because coral depends on light for growth so the murky water prevents this from happening. Physical contact from tourists with hands or equipment of boaters, divers, and snorkelers can also damage delicate coral. ...read more.

The management strategies at each of the four locations mentioned meet one or more of these. In all locations the environment principal has been met because they have all declared part of the reefs as marine parks, which preserves the ecosystems. In Australia the equity and social justice principal was also met by zoning of parts of the reef for different usage. This means that two of the four principals are met by Australia. In Egypt again the environment principal is met as well as the futurity principal because of the capital given towards management by the European and Egyptian governments. As in Australia two of the four principals are met. The Philippines adopted the public participation principal, along with the environment principal, by educating people in how to preserve the reefs and things that cause damage to them. The USA is the only location that has only met one principal and not coincidentally it is the most severely damaged reef of the four examples given. None of the specific locations are fully sustainable but three of the four have made substantial moves to becoming sustainable only the USA remains basically unsustainable. Sources http://www.dep.state.fl.us/COASTAL/programs/coral/hazards.htm OCR booklet: Oceans as a Threatened Resource ...read more.